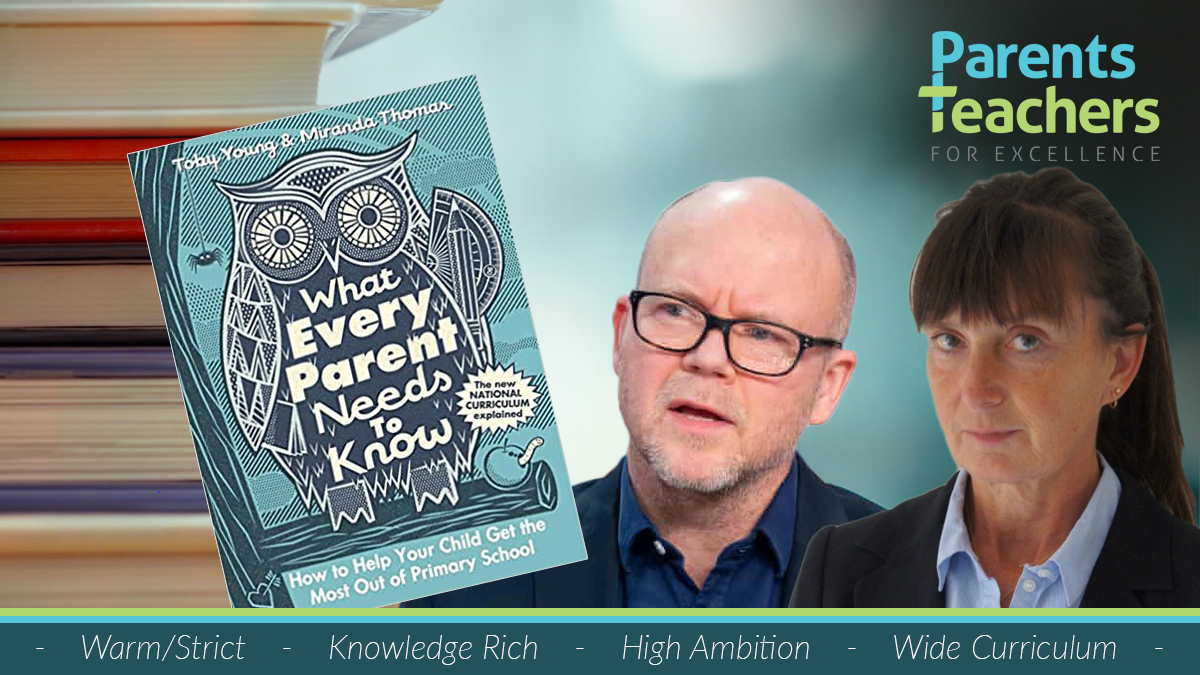 “What Every Parent Needs to Know: How to Help Your Child Get the Most Out of Primary School” – Toby Young & Miranda Thomas

18th June 2021
By Parents and Teachers for Excellence

Between dabbling in New York and Hollywood high life and becoming a free speech warrior, Toby Young thrust himself into the world of education with some real success.

He led a parent group that opened one of the country’s first “free schools” – the West London Free School. The story of how this happened and how they got the school opened in only eighteen months is quite the tale. A 2010 BBC documentary covered the first part of that journey, but alas it is not available online these days.

One institution wasn’t enough for this group though – they were keen to grow a family of warm-strict, knowledge-rich schools, and soon enough they had added three primaries to the original secondary. And it is out of the work to do all this that this week’s book comes, “What Every Parent Needs to Know: How to Help Your Child Get the Most Out of Primary School.”

Written by Toby and Miranda Thomas, a very experienced teacher, it was published in 2014 and does exactly what it says on the tin: it is a guide to the things that primary aged children should be learning in school. It came out not long after the National Curriculum had been revamped as part of the Michael Gove/Nick Gibb reforms. Some reviews of the book were sniffy about its tone – far more earnest than a typical Young product, and others criticised it as overly simplistic.

But this was to completely miss the point of the book. It’s tone and level were what made it so useful for its target audience: parents who knew that they knew little about schooling these days, and who wanted an accessible primer on key aspects. And on these terms the book is really, really good.

Starting with Reception, it takes each year of the primary school curriculum, and gives an overview of the things children should be learning. Interleaved with this are sections on other important elements: grammar & punctuation, special educational needs, even school dinners!

It also has a glossary of education terms and acronyms at the back. Those of us already immersed in schools can often forget that this stuff is a real barrier to others who aren’t fluent in such things, so to cover this was a nice touch.

And if this book whets your appetite for more curriculum reading, you can then go and explore stuff like Civitas’ “What your child needs to know” series, or indeed the National Curriculum documents themselves.

Seven years on from publication, some aspects have been superseded by recent changes. However, if you’re a parent who wants something to explain what is going on at primary school these days, it’s still a really great starting point and we can wholeheartedly recommend it.