The Knowledge Rich movement has demonstrated, over and over again, that without such a foundation the child’s ability to go on to learn more complex and advanced ideas, techniques and topics is fatally compromised.

“The curriculum is the means by which we ensure that all our children get their fair share of the rich cultural inheritance our world affords.  A good curriculum empowers children with the knowledge they are entitled to: knowledge that will nourish both them and the society of which they are members.”

Of course, any and every school curriculum contains knowledge, but in the past fifty years in the UK, many in education asserted that what specific knowledge was imparted didn’t really matter, so long as it focused on what was “relevant” to pupils, and supported development of generic non-topic-based skills. An approach was promoted that the ‘process of learning’ was more important than what was actually learned.

However, this meant that in the UK (as well as in many other countries), generations of pupils were left with this somewhat random and arbitrary understanding of the world they grew up in – increasingly disconnected, as the approach to teaching took hold, from the past, the wider present, and likely futures. Perforce, it meant that they were often taught in less effective ways that actually made it harder for children to learn anything.

As E.D. Hirsch showed in “Why Knowledge Matters”, this result wasn’t just something asserted anecdotally by pupils and their teachers; it can be seen in standardised tests scores wherever the anti-knowledge approach has been adopted.

The most prominent recent example is Finland, whose PISA results were for decades the highest in the OECD, helped in particular by the very high calibre (and high pay) of its teachers. In 2016, Finland introduced “phenomenon-based learning strategies”, an approached based on encouraging “students to become more active in their studies, to cooperate in study and research groups”. The result has been to see Finland plummet down the PISA tables, particularly for poor, or disadvantaged, or immigrant, or male pupils. Paradoxically – and depressingly – when visitors flock to Finland to discover why it historically has done so well at education, they are shown what is done now (a failing approach) rather than what was done before (a successful Knowledge Rich approach).

As a further example, pointed out by Hirsh, the chart below shows what happened in France when a rigorous knowledge rich national curriculum was abandoned, in 1987, in favour of localised curricula focused on generalised skills: 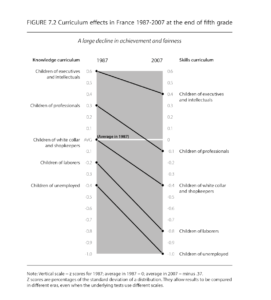 As a result of this change in approach, all pupils, across France, saw a decline in performance. Children from every social class saw a deterioration in ability; most worryingly, children from the poorest families saw the steepest decline, to a level way below that which the previous approach to education had accomplished

A Knowledge Rich approach avoids the pitfalls of unstructured teaching, as it is built on two important principles:

Each curriculum is carefully constructed and delivered to ensure that these individual building blocks of knowledge are sequenced in such a way that pupils can remember and use them in the most effective manner.

Science explains why a Knowledge Rich approach is so powerful: cognitive scientists have found that our brain works at different speeds, depending on whether we have learned something already, or whether we are relying on “working memory”. Working memory is new information that you can keep in your head. It is very limited – you can hold between three and seven pieces of new information – and it is tiring keeping things in your working memory.

But if this information is already securely stored in your long-term memory, you can – with increasing skill – quickly access and use it, freeing up your brain’s capacity to do more useful and creative thinking.

Scientists also believe that we learn new things by forming connections with things we already know: the more we already know about a topic or theme, the more easily we can learn new related information especially if it is presented in the right order, and key links are explicitly made.

So, a good Knowledge Rich curriculum looks at everything that is to be learnt as a whole, to ensure that links are made in the same subject over the years, as well as making relevant links across subjects in the same year, plus also making “diagonal” connections across subjects AND years. Clare Sealy calls this the “3D-curriculum” – it’s a great way to think of it.

It goes without saying that the content and sequencing of a curriculum will be much debated by teachers. They are experts in their subjects, and whilst much of the knowledge to be imparted will be “settled” opinion, a lot will still be contested. There is no such thing as the definitive Knowledge Rich curriculum. As E.D. Hirsch and others have explained over the years, the content and sequencing will vary from nation to nation, and region to region, due to specific cultural and other contexts.

There will always be a large common core of content across curricula within, say, the UK, due to our shared historical, geographical and literary heritage. Maths and science curricula will generally be alike globally, given the universal nature of these subjects – albeit reflecting national and local habits in terms of when different topics are covered.

But of course, across schools there will be differences in curricula beyond the core – and this is something to be celebrated. Societies remember and pass down a diverse variety of material between the generations. If the same topics were taught in every school, then those not covered would soon fade from collective memory.

In summary then, at PTE we fiercely advocate the Knowledge Rich approach as it ensures that our country delivers on every child’s entitlement to the best that has been thought and said and does so in a way that ensures that they can make the most creative and powerful use of it.

There’s a final super side-effect to the Knowledge Rich approach: it is transformative for teachers’ status and wellbeing. Why? First, the whole curriculum approach makes the creation of programmes of study and resources a whole-school or trust responsibility. This takes the burden off individual teachers to spend hours preparing the content of each class, and significantly reduces workload. Second, this puts the focus in the classroom on the ‘how’ to teach rather than on the ‘what’, so putting teacher expertise in the driving seat once more.

For all the reasons enumerated here, implementing an effective Knowledge Rich curriculum is a hugely important part of being a great school – which is why so many in recent years, including us at PTE, insist on its central importance.

The history of education shows that in countries that are democracies – where ideas and arguments are, praise be, allowed free rein – the fight for a Knowledge Rich approach to education, and a structured syllabus, will continue forever. It is clearly worth fighting for, each and every time.

PTE campaigns for educational excellence to be delivered for every child. We believe that this is achieved when all schools have a strong culture and a great curriculum, underpinned by four key mantras: Warm/Strict, Knowledge Rich, High Ambition, and Wide Curriculum.