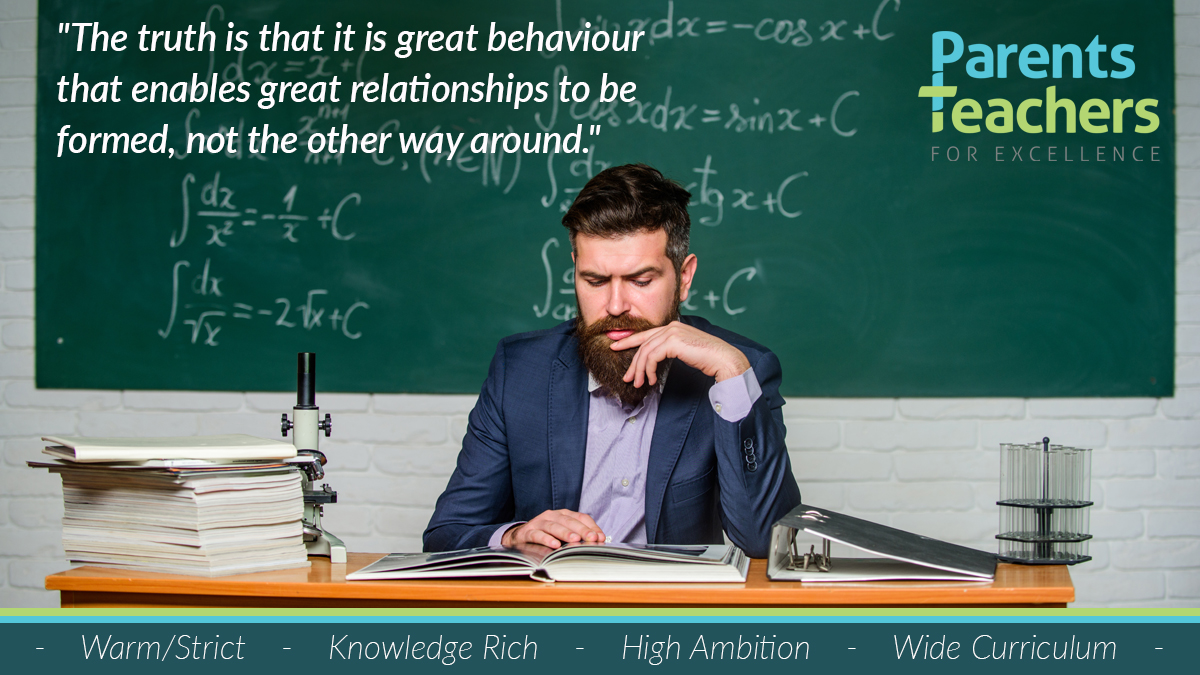 22nd June 2021
By Parents and Teachers for Excellence

With teacher-assessed grades submitted and temperatures more reasonable, hopefully this week will see things more manageable than before. While those with out-of-date takes on school life might imagine that this is a relaxed time of year, we know that parents, teachers, and pupils are as busy as ever.

Here’s to a calm final stretch of the term, without too many surprises…

At PTE we believe Warm/Strict approaches are key to a great school culture and the best way to get the most out of, and for, pupils.

We wrote previously that if we want default behaviours to be positive, it’s important that rules and procedures are simple, clear, universal, and worthwhile. This is especially the case when it comes to dealing with infringements in the classroom and elsewhere at school.

Some believe that great behaviour comes from great relationships, and so it is down to individual teachers to form relationships with individual pupils to create safe and orderly schools.

We simply don’t accept this.

Think of all the times that you have been to places where you knew no-one, or when you’ve spoken to audiences you’ve never met before. The chances are that no one spat at you or told you to f*** off, and yet you had no relationship with them. Why did this miraculous situation occur?

It occurred because most behaviours are driven by habits and norms, and these are formed by rules and routines, not relationships.

Even if relationships begat good behaviour, to ask teachers to form a relationship with every child they came across at school before they could expect respect, engagement, and compliance is just crazy. It’s simply not possible, and to ask staff to do this is not reasonable. READ MORE HERE

Jo Saxton – who was previously a member of our Advisory Council – has been named as the preferred candidate to become head of exam regulator Ofqual. This is great news – Jo has all kinds of experience of different aspects of the school and qualifications world, and is well placed to pull things back together as we come out of the pandemic.

The Education Select Committee has a new report out today: “The forgotten: how White working-class pupils have been let down, and how to change it”. It contains a number of interesting recommendations, at least one of which is already causing ripples in the news.

It suggests that we should “find a better way to talk about racial disparities”, arguing that terminology like “white privilege” may have contributed towards a “systemic neglect” of white working-class pupils who need support. The report also asks whether schools promoting ideas like “white privilege” is even legal. Needless to say, some are outraged that this is even being asked.

Just when we thought we could start to plan for a world after COVID, the DfE has released an update for schools on how to manage things in the event of future waves. Schools have been told to ensure they have management plans outlining how they would operate if any of the restrictions in the new contingency framework document were to be introduced in their area.

A major study on teaching about the Holocaust has found that teachers are“shielding” children from the full horrors of the Holocaust by increasingly “sanitising” lessons. This is due to the topic being taught at a younger age. According to Prof Stuart Foster, executive director of University College London’s Centre for Holocaust Education, youngsters are now six times more likely to learn about the Holocaust when they are in Year Seven or Year Eight than they were a decade ago. “It is a danger if it goes younger and you therefore avoid some of the awful things: what happened at the death camps and the scale of it. There is a danger that it becomes a more sanitised version of history.”

Schools employing new teachers whose training or induction has been disrupted by the pandemic are set to receive a one-off payment to allow more non-contact time. All state-funded schools with newly qualified teachers (NQTs) due to complete their induction this summer are eligible for the payment of up to £1,500, which will cover a further 5 per cent of time off-timetable – equivalent to 44 hours – over the next academic year. Every little helps!

Gavin Williamson has said that the government wants to introduce a “post-qualifications admissions” (PQA) system for universities without legislation, telling the House of Commons: “we really want to bring PQA forward as rapidly as possible”, without legislation and through cooperation with the sector. If this change goes ahead, it will be massive!

Amanda Spielman has written for Schools Week on Ofsted’s investigation into sexual abuse and harassment. She warns that “it’s important that schools don’t take a tick-box approach. Just doing a one-off INSET day, commissioning a costly safeguarding consultant, or requiring staff to read the guidance won’t cut it.”

In the TES, Jonny Kay pleads “Please, stop asking more of teachers”, arguing that instead “there are two things we need more of: efficiency and simplicity.”Well worth a read.

Following recent revelations about the National Education Union, and a poorly received response, Madeleine Fresko-Brown asks “Why is the NEU finding it so hard to retain Jewish members?” She writes: “Jewish members have long felt that the NEU has a clear pro-Palestine and anti-Israel bias. This seems to be prioritised over being pro-peace or pro-solution.”

And finally, there’s a great piece by Ed Vainker, CEO of the Reach Foundation, about the importance of Early Years – and his recent meeting with the Duchess of Cambridge and the US First Lady.

Here’s to a calm and orderly week in schools!