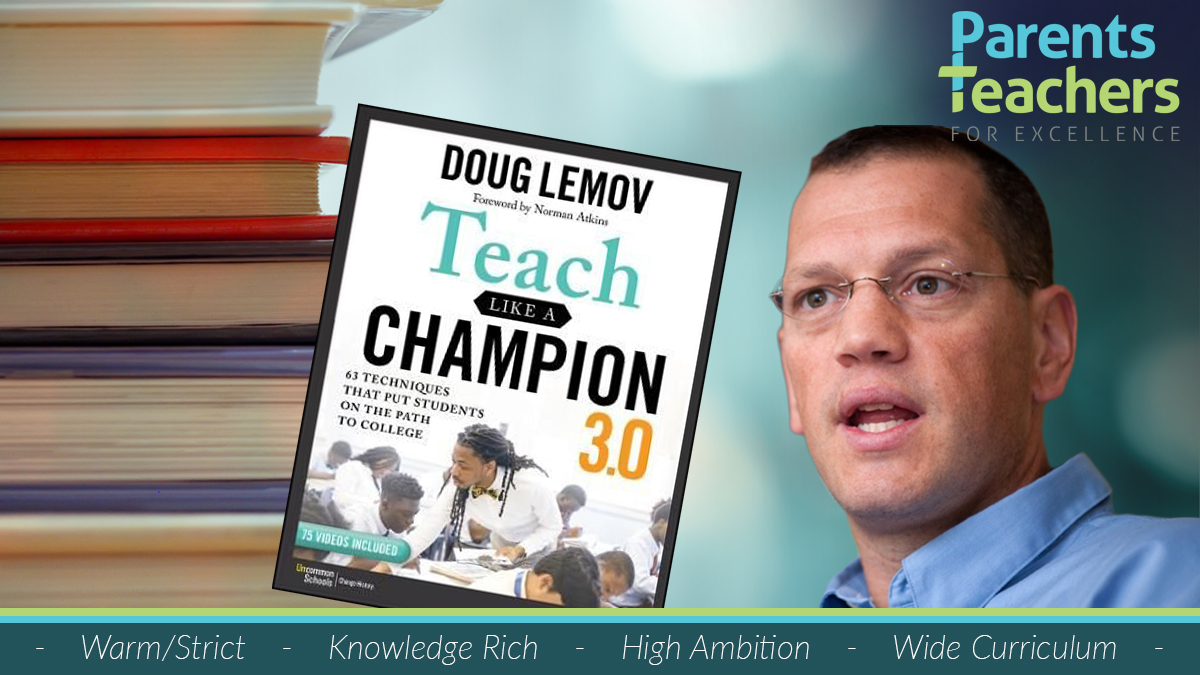 23rd April 2021
By Parents and Teachers for Excellence

Happy St George’s Day to all!  Once a national holiday celebrated as widely as Christmas, it has now rather fallen off the radar. It’s been another busy week for everyone in schools as the UK continues to unlock and some semblance of normality resumes. Here’s hoping today’s sunshine continues into the weekend so you can make the most of it.

Book review – “Teach Like A Champion” by Doug Lemov

We’ve another book to add to our “library” of the best that’s been thought and said on education over the years: Teach Like A Champion.

The first edition of Teach Like A Champion – “TLAC” to its fans – came out in 2010 and made an impact right from the start. Over time, more and more schools and teachers have embraced the approach and techniques advocated by the book’s author, Doug Lemov. It is fair to say that it is one of the most genuinely game-changing publications about teaching practice of the past few decades.

Why is this? Perhaps the most important reasons are that it:

Also, we cannot overlook the fact that Doug Lemov was, and remains, an incredibly compelling and charismatic presenter and trainer – he was out there doing this stuff for real, with real teachers at Uncommon Schools and then, as his reputation grew, with hundreds and thousands of them elsewhere.

At the heart of the book is the belief that teaching is an art and that great teachers are made (not born). Lemov says that excellent teaching “relies on the mastery and application of foundational skills, learned through diligent study”. READ MORE HERE

Let’s start with some stories from the perennial “21st century skills / subject disciplines are old-fashioned” category.

Researchers at Cambridge and Edinburgh universities have done some work on the impact of teaching science and the arts together. They believe it would help children think like Leonardo da Vinci. Hmm.

Elsewhere, Robert Halfon, Chair of the House of Commons Education Select Committee, has written again about why education should be about preparing children for the world of work, and shift away from prioritising knowledge-acquisition towards skills development. A copy of “Seven Myths About Education” is in the post to Mr Halfon…

There is some ongoing discussion about the newly-announced “behaviour hubs”. The TES has looked into what the £10 million budget will be spent on –unsurprisingly the vast majority of it is to reimburse the schools involved for releasing staff to work on the programme. However, not everyone is satisfiedthat it’s something that is needed.

Grades for Year 11 and 13 pupils this summer and next are generating much discussion. A survey by ASCL suggests that most schools will be using internal exams as an important part of deciding “teacher assessed grades” (TAGs) – with 7% saying it will THE deciding factor.

Linked to this, the exam regulator Ofqual has announced the quality assurance process they will use to check these TAGs. It seems to have not gone down well with many.

Ofsted has found that some schools were ‘behind’ with curriculum planningduring the pandemic. Spring terms visits suggested foundation subjects were suffering more than others in this regard.

Helping schools and children make up ground is going to be a big government focus in the months and years to come.

Sir Kevan Collins, the government’s “catch-up czar” has said that teachers should not be “forced” to work extra hours as part of the Covid recovery effort.He also said he would “never advocate” increasing teaching time without raising teachers’ pay.

And the Education Policy Institute has attempted to work out the likely cost of education recovery – the sums it suggests are significant.

That’s all for now – have a lovely weekend.