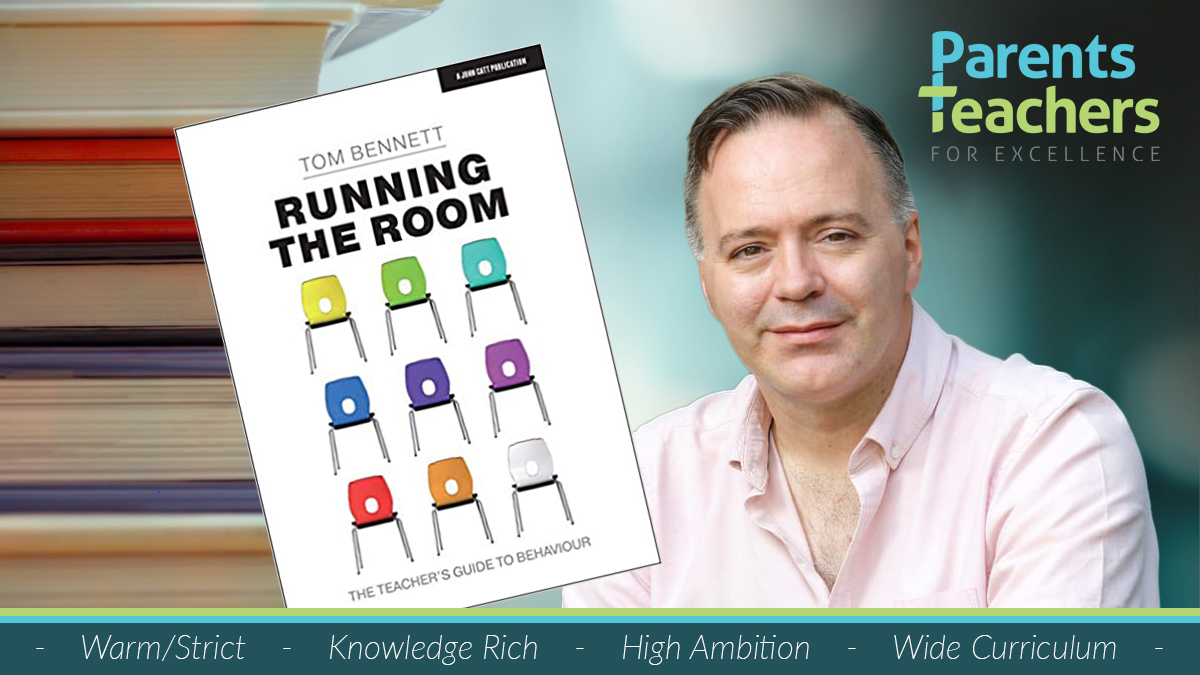 16th July 2021
By Parents and Teachers for Excellence

It’s Friday again – and so another tranche of schools start their well-earned summer break today. If that’s your school – we hope you have a brilliant day, and enjoy the sweet, sweet sleep that is the first night of the holidays.

And for those with a bit more to go – here’s to a summery weekend & a smooth run-in to the final few days.

Tom Bennett wears a number of “hats” in today’s education scene. He is co-founder of, and helps to run, researchED, a grass-roots organisation that organises conferences, events, and publications to raise research literacy in education. He is ever present on Twitter, ladling out his wisdom and charm for the masses.

And he is also the Department for Education’s “Behaviour Advisor”. In this role he has carried out a number of projects, including a review of behaviour management in schools that culminated in his report “Creating a culture: how school leaders can optimise behaviour”.

Tom writes and speaks beautifully and with flair, and can make any topic come to life with humour and flow. This is very much the case in his latest book, “Running the room”. Where his DfE behaviour report was about the behavioural principles at a whole school level, there is more focus in this book on what goes on inside the individual classroom.

The title comes from a phrase he picked up in his pre-teaching days when he worked in nightclubs:

“The job was to run the space; to see it as a room, not a series of tasks or problems one after another. What you did in one part of the room affected the other parts… It meant taking a step back, anticipating problems and heading them off before they happened… From the point of view of efficient club management, the best nights were the boring ones.”

As for nightclubs, so for teachers: READ MORE HERE

It’s been announced that Sir Steve Lancashire, the founder and chief executive of the REAch2 Academy Trust, is to step down next year. Founded in 2012, REAch2 has grown into one of the biggest in the country and really shown what a difference a good trust can make to schools and pupils across the country.

A new review by the Education Endowment Foundation (EEF) looking at how cognitive science principles can help teachers in the classroom has said that they cannot be used as a “silver bullet”. The report says that while it is valuable for teachers to know the principles of cognitive science, more research is needed on the effectiveness of approaches when used in different subjects and phases.

Professor Becky Francis, chief executive of the EEF, said: “One of the most important questions educational research can ask is how children learn. If we know how they process and retain information, we can adapt our approach to teaching accordingly and, in turn, increase effectiveness.

“As with much evidence, the key message here is the importance of nuance. Principles from cognitive science are neither myths to be discounted nor silver bullets that directly translate into accelerated progress.”

At the House of Commons Education Select Committee on Tuesday, MP and ex-teacher Jonathan Gullis urged the leaders of the National Education Union to resign, saying that they had been “out of touch” and “working against the interest of children” during the Covid pandemic.

Gullis accused Mary Bousted and Kevin Courtney, joint general secretaries, of “bringing the reputation of teachers into disrepute”, saying “The image [of teachers] was that any time there was an issue, it was the teaching profession that was moaning and groaning while police officers, firefighters, doctors and nurses were getting on tackling this global pandemic.”

The number of pupils missing school has risen sharply again – up 30% last week on the week before. Last Thursday 820,000 kids were at home self-isolating – 11.2% of the entire school population. Only 39,000 of these were off having actually tested positive. The situation is expected to get worse as the summer break looms, with parents keeping children at home in order to avoid having to self-isolation clashing with family holidays.

On Wednesday The Times reported that only 18% of schools are planning to run the summer school sessions that ministers say are part of their catching-up plans. Gavin Williamson has said that up to 500,000 children would benefit from schools remaining open this summer.

However, a survey of 1,100 head teachers by The Key, which provides information to heads on school management, found that only 18% had made plans to open; 23% had not yet decided; 5% were setting extra work over the holidays; and 55% cent were definitely not going to open.

Heads cited staff needing time off over the summer, children needing a break from learning and families not supporting such initiatives as reasons for not opening. A lack of budget was cited by a quarter of respondents.

In the slipstream of outrage from teacher training providers at the government’s proposed sector reforms, Ofsted inspection reports have been released which suggest that things are not as rosy as many have claimed.

The first 11 reports from inspections carried out under the new initial teacher education framework have been published, with inspectors criticising provision at five of those inspected. More are expected very soon, with rumours of more poor outcomes in these.

Some of the criticisms in the reports released are quite stinging. In one, inspectors noted that trainees praised the provider as “warm and welcoming” and were “generally satisfied with the support and guidance they receive” – but noted that they had “no benchmark so their satisfaction with training is misplaced” and “with the benefit of hindsight, [former trainees] realise that the over focus on what leaders consider the essentials for teaching in the local area, such as behaviour management, is not helpful”.

Training providers seem to be digging in though. The National Association of School-Based Teacher Trainers (NASBTT) – which represents more than 200 smaller ITTs – says smaller providers will be disproportionately affected by the proposed changes, which would involve providers having to get reaccreditation and the market being “centralised” in the hands of a smaller number of larger providers. “Our primary fear is that these recommendations, taken collectively, represent an immediate and catastrophic risk to the teacher supply chain and to the quality and availability of provision.”

Finally today, in the TES we have the probably inevitable “5 things school leaders can learn from Gareth Southgate” piece: “How then has he been able to achieve what eluded so many managers before him? A lot has been made of his compassion, honesty and character – and rightly so. But there is astute leadership taking place – the kind that teachers at all levels can learn from to help improve their schools.”

That’s it for today. Have a sun-filled & restful weekend, wherever you are!