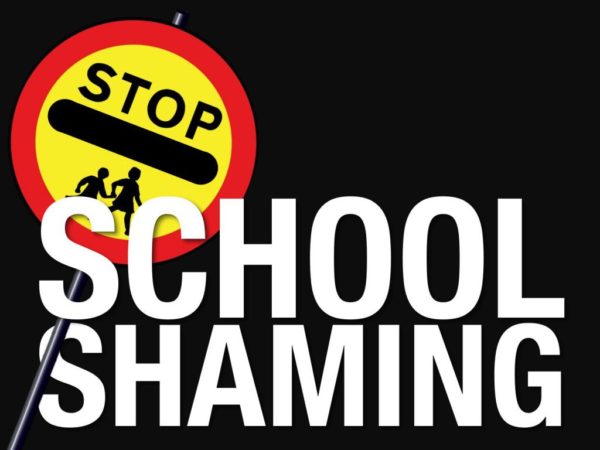 I’ve written before about the shameful phenomenon of school shaming. Some claim that it isn’t possible to shame a school, because it is a just a building or an institution, and it doesn’t have feelings or a sense of embarrassment.

To say this though is to ignore the fact that a school is an extended community of staff, children, their own families, and of those who have passed through its doors in the past, and those that will wander its corridors in the future. Attacking a school and besmirching its reputation causes significant direct and collateral damage.

When someone takes an allegation of unreasonable treatment by a school to the media they immediately have the upper hand as the school can’t give the full story, because it is obliged to protect a variety of professional confidences. We are thus presented with powerful testimonies of woe by a child or parent, but a bland, cautious statement from the school or Head teacher.

And BOOM – in sweeps the social media mob, with their cries of outrage and self-righteousness. “What a ridiculous decision!” they shriek. “How could a teacher do that?!” they wail.

As the story is shared and retweeted and liked, ping-ping-ping go the notifications (literally or metaphorically) of those at the centre of it. The agitator enjoys affirmation from the attention gained. Journalists smile as their clicks go through the roof. Editors encourage them to find more stories of this type. The members of the school community being attacked go to ground to wait it out. Little by little the institutions that we hold dear and that used to bind us all together are undermined – and then we wonder why public discourse has become so angry, and trust in others faded.

Of course unprofessional, immoral, or illegal actions can and should be challenged – and in public too if needed! It’s why we have evolved over time sophisticated whistleblowing, child protection, and other laws and policies.

But let’s be honest, the vast majority of negative school stories in the media are (thankfully) not about things of this severity. They’re one-sided takes on situations that are not really anyone’s business, or more easily resolved in private without the heat and angst of a social media mob baying for blood.

As parents and teachers working together I think we can politely challenge and then change this poor behaviour – but first we need to have a more accurate idea of exactly where and when these cases are occurring.

So today PTE is launching the first stage of our #StopSchoolShaming campaign.

Instead of retweeting or sharing the story in disgust, we’d like you to let us know whenever you see an example of media school shaming, by logging the details on our website (linked to here). We’ll then be able to support the schools concerned, track incidents, and be better able to spot patterns and identify ways to prevent future outbreaks.

Please share this with friends, family, and colleagues – if this is going to work, we need as full a picture as possible. We’ll share our findings and, over time, hopefully help people resolve concerns better and promote the good things in our schools that little bit more.