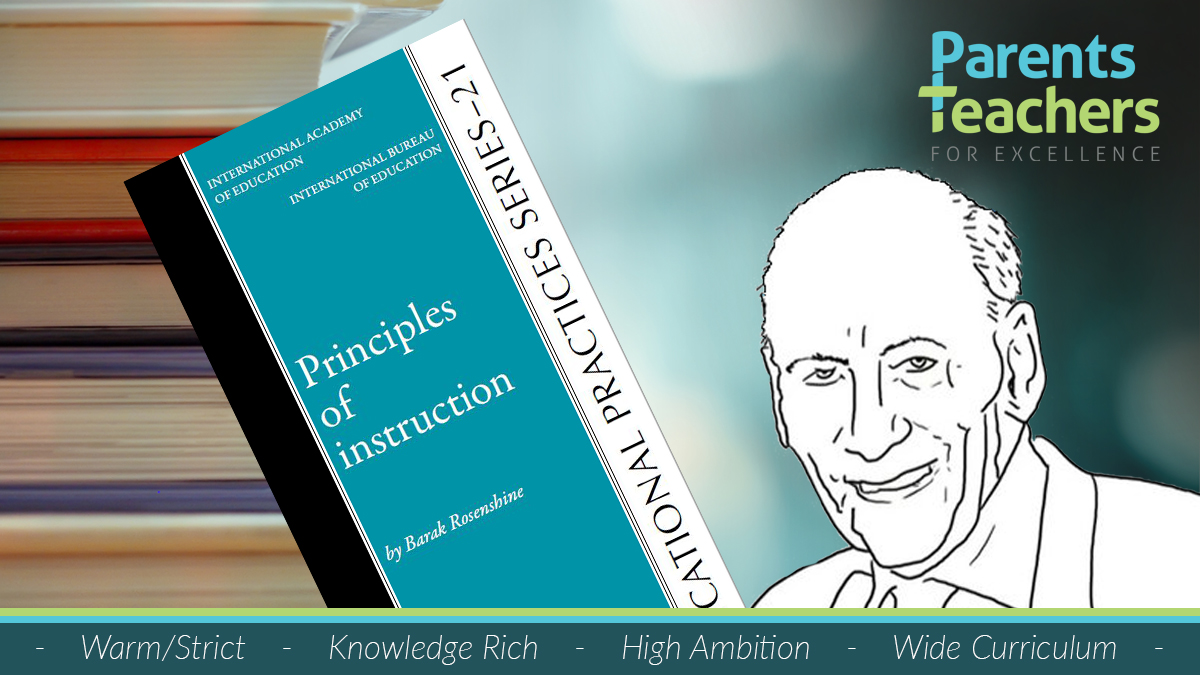 11th June 2021
By Parents and Teachers for Excellence

This week’s classic is a 2010 booklet that later became a 2012 article in the journal American Educator – Barak Rosenshine’s “Principles of Instruction”.

It is probably one of the most influential pieces of educational research of recent times. You won’t find a great school or department that doesn’t have it, or the principles within it, covered by their staff reading list or training programme. So what does Principles of Instruction cover and why has it proved so impactful?

It is a very simple, clearly written summary of what relevant research has to say about effective teaching, pulled together as ten key principles. These cover practical, down-to-earth things such as “Daily review”, “Present new material using small steps”, and “Obtain a high success rate”.

Each principle is explored and explained, both in terms of the research underpinning it, and consequences for the classroom. Concrete examples of practice are given so that the reader can picture how the principle could be implemented. And, um, that’s it.

But that’s its beauty and why it has been so influential – it does exactly what it says on the tin, and doesn’t overcomplicate things.

This is because Rosenshine does such a brilliant job of pulling together and boiling down findings from research across three different fields – cognitive science, classroom practices of master teachers, and cognitive supports to help students learn complex task – explaining that:

“Even though these are three very different bodies of research, there is no conflict at all between the instructional suggestions that come from each of these three sources. In other words, these three sources supplement and complement each other.”

This means that we can be pretty confident that the findings are valid and the ten principles effective.

There’s not much more to say about the piece. The 2012 version is literally only nine pages long, and very readable indeed, so rather than write more here, we’d urge you to just read it yourself!

And if you want more exemplification, then Tom Sherrington has written more on it, including a short illustrated book “Rosenshine’s Principles In Action”.