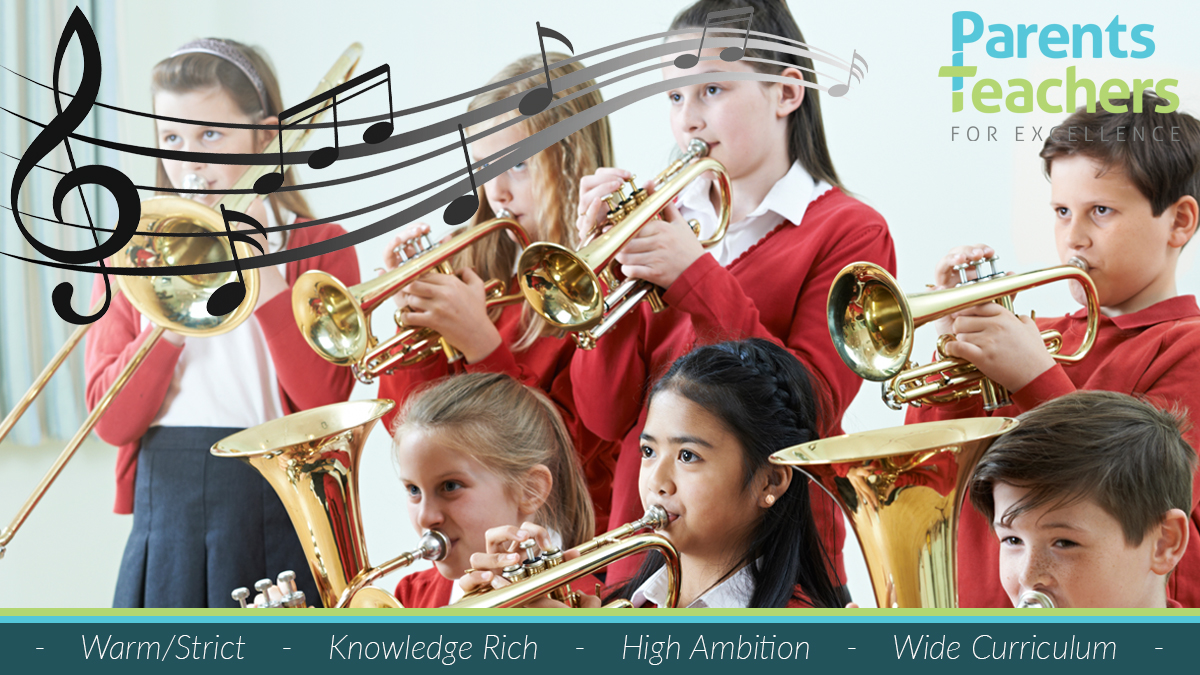 28th March 2021
By Parents and Teachers for Excellence

Here at PTE we want educational excellence for every child. Vital for this is a knowledge-rich & wide curriculum – of which music in all its varieties is an essential part.

Every child should experience the power, beauty, and emotion of the greatest that has been sung and performed and so we welcome the “Model Music Curriculum” published by the Department for Education this week. It is a great example of the kind of things our best schools do already. If every school taught this, or something of similar coherence and quality, it would transform the lives of millions of children for the better.

As such we are delighted to reproduce on our site an article about the Model Music Curriculum by Nick Gibb, the Minister for School Standards. It was first published in the Telegraph on March 26th 2021:

Every primary school pupil should be taught Mozart

Music is all around us; it inspires us, soothes us, and energises us. It is an important part of most people’s lives which is why in this year of lockdown people are listening to more music – in 2020 there was an 8.2% increase in the number of albums either bought or downloaded, according to the British Phonographic Industry.

The National Curriculum, which drives what is taught in schools, summarises at a high level what a child is expected to be taught about music throughout their primary school years and the first three years of secondary education.

Across the country there are schools with the richest music curriculum any parent could wish for. At Feversham Primary Academy, for example, children are taught to read and write music and all pupils are taught to play a range of musical instruments.

Northampton School for Boys has more than twenty choirs, orchestras and ensembles and 10% of its pupils take the Music GCSE, much higher than the long-standing national average of 6%. And at this school 69% of pupils (in 2019) were entered for the EBacc combination of GCSEs, proof that music doesn’t need to be pushed aside in order to concentrate on those key core academic subjects that provide the widest opportunities for a young person’s future.

In schools like these a rigorous and broad music curriculum that inspires their pupils to love music stands alongside high levels of academic attainment. A rich variety of music should be part of the daily life of every school.

When I think back to my own childhood, if it hadn’t been for the classical music played before assembly at my primary school, or the years spent in school and church choirs, I doubt that my musical appreciation would have gone much beyond my favourite pop songs.

But we want to make sure a high-quality music curriculum is the norm in every school.

That’s why we asked the former chairman of the London Music Fund, Veronica Wadley, to lead a group of experienced musicians and music teachers, including Julian Lloyd Webber and Ed Watkins, the inspirational head of music at the West London Free School, to draft a Model Music Curriculum, encapsulating the very best school music curricula. In 102 pages it sets out the musical knowledge that children should be taught in each year of their school education until the age of 14.

The new model curriculum introduces 5 and 6-year-olds to Mozart’s Rondo alla Turca and Holst’s The Planets as well as to Ma Rainey’s Runaway Blues. Junior school pupils will discover the Hallelujah Chorus and the funk of James Brown, as well as take the first steps in learning to read and write music.

Over the course of nine years of music education pupils will know and understand rhythm, metre, tempo, pitch, melody and harmony. Crotchets, quavers, minims and semibreves will be as familiar to year 5 and 6 pupils as words on the page, as will the vocabulary of allegro, adagio and crescendo, the major and minor keys and 4/4 time. Singing and learning to play a musical instrument will be as important as hearing Beethoven’s 5th Symphony in Year 4, Scott Joplin’s Maple Leaf Rag in Year 2, Clara Schumann’s Romance for Violin and Piano in Year 5 and Tchaikovsky’s 1812 Overture in Year 6.

In all, the Model Music Curriculum will open the ears of young people not only to the Western Classical Tradition but to modern classics such as Queen, Bob Marley, Kate Bush, Whitney Houston and the Beatles. It will widen horizons to the musical classics from around the world: Brazil’s Fanfarra in Year 1; Indonesia’s Baris in Year 2 and India’s Sahela in Year 3. Musical traditions from Jazz to Samba, maximising the musical influences that will inspire creative composition that forms a key part of the Model Music Curriculum, with Year 9 pupils, for example taught to compose chord sequences.

Around the country 120 Music Education Hubs are providing schools with the musical expertise to bring music to life in our schools. The Model Music Curriculum will provide new impetus to these hubs.

Our aim is to make sure that every child is taught to read and write musical notation and has been introduced to the musical giants of the past, equipping them and inspiring them to compose and perform their own music. Music brings joy to us all. After the most difficult of years, it’s time for a musical renaissance across England’s schools.