For reasons I’ve not yet figured out, Yorkshire is a bit of a PTE hotspot, with loads of people and schools from across the whole region tapped into to what we’re doing in different ways. And so last week I found myself with the need to head up the A1, which gave me the chance to visit a school that had been on my radar for a while – Leeds City Academy. I’m really glad I went, as I think there are lots of things we can learn from their experiences. 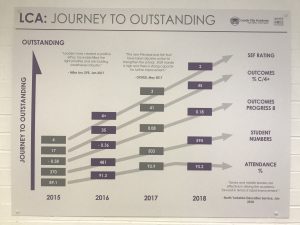 LCA is definitely a school that’s been on a journey in recent times. Indeed, they are very proud of how things have gone in the last few years – nearly everywhere I looked was this eye-catching diagram showing how key metrics have improved.

Perhaps more importantly, they’re expecting another big jump in many of them, and attendance is up significantly – a really great indication of more great stuff to come.

The first thing that struck me – even before I got into reception – was how welcoming people are. Two passing members of staff greeted me as I walked up the path to the front door, and things continued like this throughout my stay.

The kids are AMAZING. Bubbly, engaging, interesting, eloquent – the ones I chatted with blew me away. They have a strong sense of what it is that their school does well, and what it does differently to other schools too (as far as they perceive things.) 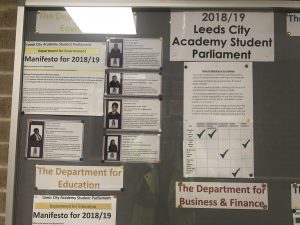 One aspect that I’ve not seen before and was struck by is how the Student Parliament is more than a talking shop, with members allocated to one of five “Departments” – Health, Environment, Business & Finance, Welfare, and, of course, Education.

The politics geek in me loved the idea of the executive being formed from the legislature – but more importantly it’s a neat way of giving kids actual responsibility for improving things, not simply a platform to moan.

I managed to grab some pupils for an extended chat about their experiences of the school. This proved to be illuminating, especially regarding the changes in the last couple of years.

When I asked them which one aspect of the school I should recommend to other teachers they suggested:

It struck me how closely these matched the messages I got from staff. As I toured the school and observed lessons, transitions, and break, SLANT was visible, I observed what I now realise was an “in partnership” discussion taking place, and every lesson had a clearly defined “red zone” element (where the challenge is taken up, and pupils work independently to enable their understanding to be put to the test.)

There’s a focus on sensible, relevant CPD – scheduled on the timetable, not after hours. They’ve scrapped marking and moved to whole-class feedback (supported by training in this.) SLT are visible throughout the day, checking in on lessons, supporting colleagues where needed.

The team are clearly proud of how things have progressed, and I think they are right to be. It’s combined with humility though – they know how much more they can do to improve the school further. Like so many others, they are looking to improve their curriculum to make it richer and even more robust. However, they’re sensibly approaching things in a manageable fashion, as they recognise how big the task is; they want to both get it right and avoid overburdening colleagues.

They had been visited by Ofsted before half-term, and at the time of me writing this they are currently awaiting the official report. LCA and its predecessor school haven’t been judged Good or better in donkey’s years – I hope they get an outcome that recognises the positive impact that all their hard work has made.

If you’re near Leeds anytime, it’s definitely worth a visit. They’re an incredibly friendly bunch, open to suggestions, and keen to share the lessons they’ve learned as the school has improved. I for one am looking forward to another trip later this year to see how things move on again!