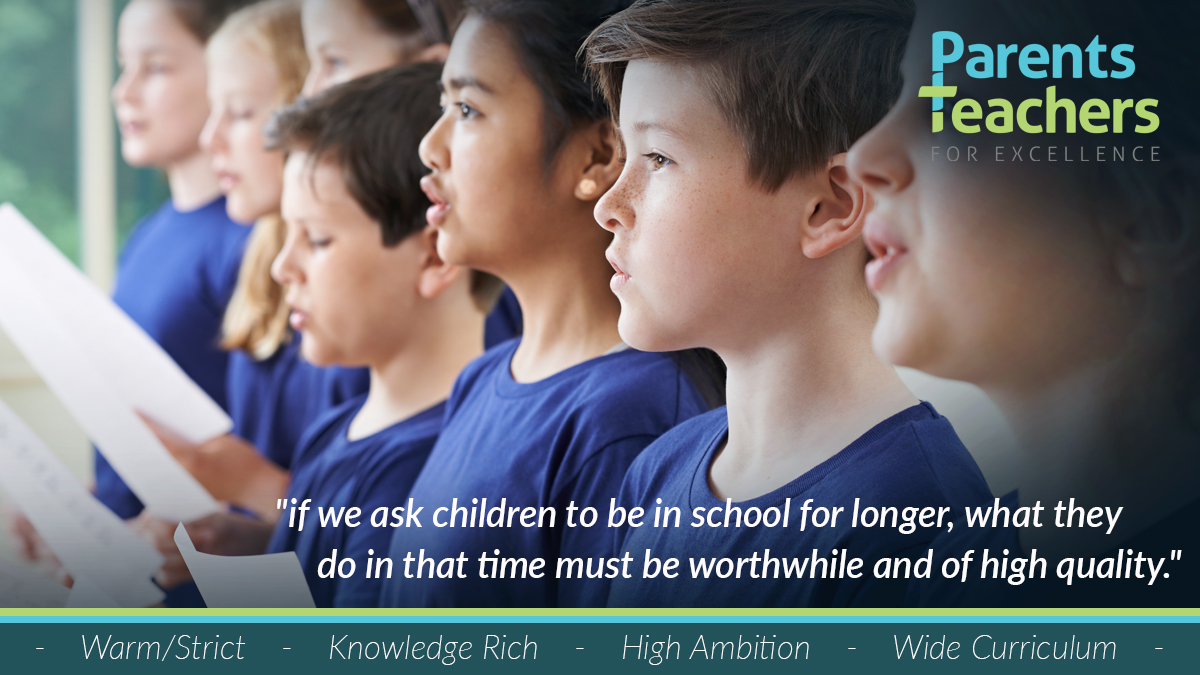 29th June 2021
By Parents and Teachers for Excellence

With the end of the academic year in sight, reports suggest that Covid is once again causing extra disruption in our schools. This is reflected in the topic and tone of education news stories this week. Here’s hoping that cases level off soon, and everyone is able to enjoy a relatively straight-forward run in to the holidays…

When people talk about a school’s curriculum, they are usually referring to the topics that are taught in timetabled lessons in a formal way. As most children don’t live with a mathematician, scientist, historian, or linguist, this kind of important knowledge is best taught in school, where pupils can be brought together with subject experts and taken on the learning journey in well-structured and creative ways.

However, as we have said before at PTE, if children are to flourish and receive a genuinely knowledge-rich education as they grow up then they need to experience a Wide Curriculum, one that goes well beyond the formal and ‘academic’.

Much of this will naturally come from a child’s day-to-day interactions with their family or local community, but there are lots of ways that schools make a big difference to this aspect of education too – for instance, organising activities that bring pupils together for experiences that they may otherwise not come across. Just as most of us don’t live with academics, so most of us don’t know an opera singer, piano teacher, brain surgeon, football coach or politician.

There’s also drama, competitive sports, trips to the theatre, museums and galleries, concerts, clubs and electives, guest speakers, residentials… the list goes on. If schools are going to organise these vital opportunities, then the time for it all has to come from somewhere.

And given how much essential and exciting stuff schools already have to teach young people within the “formal” curriculum, finding time for all these other equally essential and exciting opportunities isn’t easy. It’s why great schools are so clear about their priorities, in order that they can decide what they will – and won’t – cover in the time available, to make the most of it. READ MORE HERE

As the number of case of Covid has risen across the country, so the number of pupils having to isolate due to members of their “bubble” testing positive has also increased. The week before last, over 250,000 children had to isolate for this reason.

Yesterday Professor Russell Viner – a key member of SAGE – said that the government needs to “rethink all of our rules about schools”. He argued that schools were “not the driver of this pandemic — infections tend to flood into schools from the community” and that ministers needed to “think carefully”before imposing rules on children that vaccinated adults did not have to obey.

Lots of parents would probably agree with this given the impact of all the isolating going on. And last night the Guardian reported that ministers are preparing to announce major changes to the guidance on this very issue. Apparently isolation is likely to be replaced with a testing regime – will be interesting to see what is decided in the end.

Yesterday morning the Shadow Education Secretary Kate Green spoke (virtually) at the (virtual) Festival of Education. She flagged two major concerns with this summer’s exams: the huge pressure some parents are putting teachers and schools under regarding their children’s teacher-assessed grades (TAGs), and the inconsistency that is being reported within and between schools and regions for TAGs too.

She is quite right to raise these worries – they are indeed a big problem with any non external exam system like that adopted this year. However, it is hard to know how serious her concerns are as Labour still seems attracted to scrapping GCSEs and moving towards a system more like what we are experiencing now than what we’d normally have.

(And interestingly, in a survey conducted by the TES, only a fifth of teachers said they wanted to see GCSEs scrapped. Have TAGs reminded the profession that externally set & marked exams are the least bad option for assessing kids in a manageable fashion?)

Elsewhere in her speech, Kate Green said that an extended school day could be used to fit more “life skills” into the curriculum. Let’s not say any more about this here.

Today’s Times has the front page headline: “Pupils face total ban on mobile phone use – Government vows to end classroom distraction”, as the DfE launches a call for evidence as part of a six week consultation on behaviour, discipline, suspensions and expulsions. Among other topics, schools will be asked for information about their behaviour strategies, their use of so-called “managed moves”, and how they deal with mobile phones.

The Sunday Times had an interesting but worrying article about teachers worrying about their pupils reporting them for so-called “micro-aggressions”. Nicholas Hewlett, headmaster of St Dunstan’s College in southeast London, said teachers see “a righteous generation of children looking for their teachers to trip up, [a generation] who are looking for the micro-aggressions”. If this is widespread, it’s a sad situation to be in.

Ofsted has released updates to its inspection handbooks for the autumn term, and there are a few changes of note.

There will also be checks on how tutors are being deployed for catch-up work, and how their use fits into the school curriculum overall i.e. that they’re not an afterthought.

Kirsty Walker has some great stuff to say on why extra-curricular trips are such a special part of the education experience – and she’s SO right about this, although hopefully her FE-specific experiences are not replicated with school-aged pupils…

In his education column for Conservative Home, John Bald has warm words for the Chartered College of Teaching: “It is the only educational organisation whose focus is on teaching, rather than politics or management, and I have become a Fellow. We need to make sure that it is not dominated by a point of view, but Dame Alison understands the need for a broad church.”

In his regular TES column Mark Enser tackles the minor question “what is teaching?” and ponders whether the age-old debate is drawing to a conclusion: “I think we are starting to see a welcome change in English schools where, after centuries of being told to be a guide on the side, the teacher is taking their place as a sage on the stage.” Let’s see!

Over in Schools Week Jeffrey Quaye of Aspirations Academies Trust ponders the various definitions given for “cultural capital”: “our focus is ineluctably and unconsciously drawn to the objective and embodied forms of cultural capital – what we can prove students know and how we can get them to behave. Meanwhile, institutional cultural capital faces neglect. “

Lots to mull over alongside bubbles bursting and football coming home. Have a wonderful week.