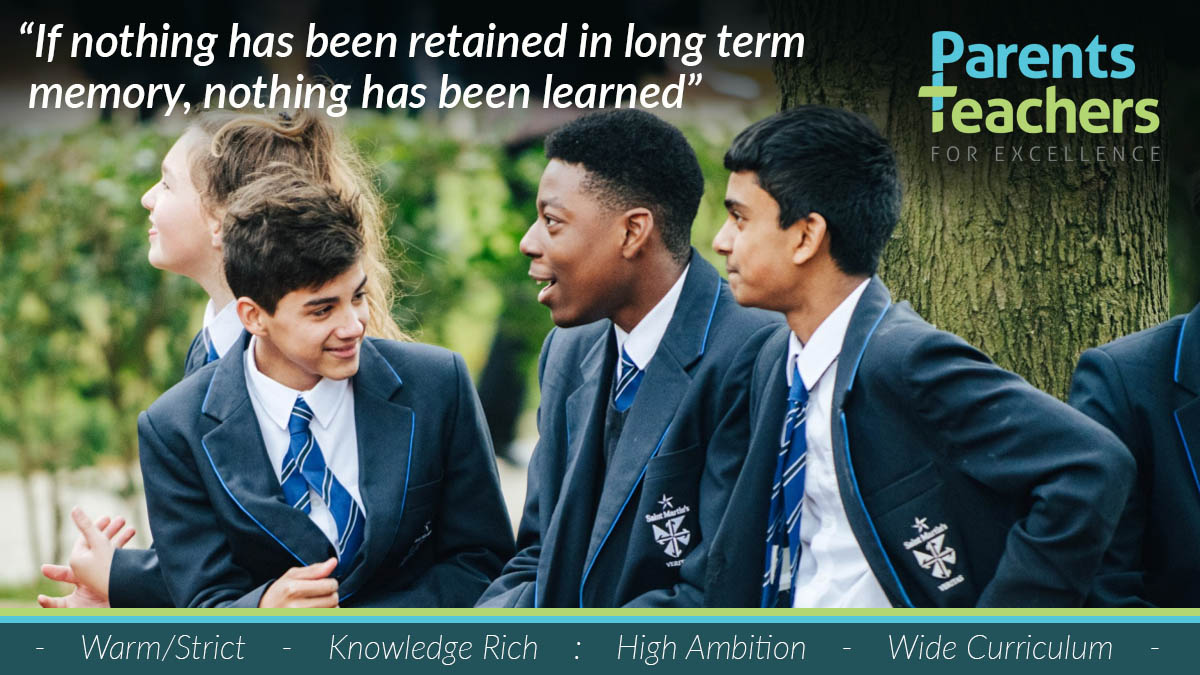 21st September 2021
By Parents and Teachers for Excellence

While the dust settles from the government reshuffle, and new ministers start to get to grips with new positions, the rest of the world continue about their lives completely unaffected – just as it should be.

Those of us with a particular interest in education will, over time, feel the influence of the new suite of politicians in the Department for Education. Perhaps the biggest changes will come about as the era of Nick Gibb as Schools minister passes. It will be interesting to see which policies and passions come to the fore from our political overlords.

Whatever happens in this regard though, the chances are that things will change around the edges, and teachers and families will simply continue to do their best for children day in, day out. As it always is and should be.

Clive Wright is Headteacher of St Martin’s Catholic Academy in Stoke Golding. In recent years St Martin’s has changed lots – not only in terms of age-range and size, but also its “what” and “how”. We’re delighted that Clive has written for PTE about the journey the school has been on, and the things that he thinks have made a real difference along the way…

The second part of Clive’s article describing some important elements that enabled Saint Martin’s to manage all the changes as the school converted from an 11-14 school of fewer than 300 pupils, to an 11-16 school of over 800, and at the same time become one of the top performing schools in Leicestershire.

You can read Part 1 here:

I used to think that the quality of teaching and learning was everything. And then, through the ideas of Siegfried Engelmann and blogs like Michael Fordham’s ‘Curriculum as progress’, it dawned that the diet is as important as the way it is imparted.

In other words, the same skilled teacher in English following a curriculum in Year 7 of Harry Potter, Michael Morpurgo and general topics like writing newspapers articles or Biography will produce very different outcomes and rates of progress if the diet is Homer, Ovid, Rhetoric and Renaissance literature.

Our teachers think very deeply about their curriculum. In a practical subject like art, instead of pupils dabbling in a number of different art-based activities like painting, pottery, screen printing and generally letting their creativity flow, we focus on very specific and practiced skill development. Art at Saint Martin’s is essentially a course that teaches all pupils to become proficient portrait artists. Drawing techniques are methodically taught, pupils are explicitly and systematically taught how to draw various facial features with a focus on practice, accumulating in portrait drawing and painting. The outcomes, even after just 5 or 6 hours of teaching, are extraordinary.

This was another one of those revelations that now seems blindly obvious.

In a previous school I was being observed in a ‘mocksted’ and teaching a lesson to a group of 6th formers on some aspect of A level Philosophy. The students lapped up ideas about the Verification Principle or some such thing. The lesson was judged to be outstanding but merely a week later, when I asked a fairly straight forward question like “What is the Verification Principle?”, I had bemused faces looking back at me as if this was an entirely new concept. The lesson clearly wasn’t that outstanding. READ MORE HERE

Here at PTE we are massive fans of people who help schools to make their pupils’ learning even more knowledge rich and fun-filled. The Primary Knowledge Curriculum team have some great sessions coming up that does exactly this, so we thought we’d flag them up to our readers today.

All courses can be booked on https://www.primaryknowledgecurriculum.org/events.

Early Years:
14th October – ‘From Little Acorns, Great Oaks Grow’. How to plant a knowledge-rich curriculum in the Early Years

– Schools Week has a handy summary of the ministers now in charge at the Department for Education.

– The Sunday Times has an interesting profile of the new Education Secretary Nadhim Zahawi.

“It was at UCL that Zahawi discovered Conservatism. At the freshers’ fair he was accosted by a young man handing out copies of the Socialist Worker newspaper. When Zahawi declined to take one, the man turned aggressive — so Zahawi walked across to the Conservative Collegiate Forum desk and signed up.”

– Nadhim Zahawi has written a blog for the DfE website to introduce himself to the sector and thank people for their hard work.

“My commitment is to pursue and support excellence for every child and every learner. That means academic excellence and skills that lead to brilliant jobs; but also the surrounding support and care that allow every child to take advantage of those opportunities and make the most of them. I will listen to you and work with you to make sure we do right by children and learners. And, with you, I will also listen to children, families, young people and adult learners so that we can spread opportunity far and wide.”

– Over at Conservative Home, Nick Gibb has written a piece asking his successors to not ease up on standards:

“And I urge my successors to resist the siren voices of those who call for GCSEs to be abolished. Nothing would widen the attainment gap more than such a dismal and unambitious policy. For a large minority of people, GCSEs are the last academic qualification they will take. Remove them, and that group lose any valid certification of a broad education. GCSEs also serve to define a demanding curriculum and they help hold schools to account. Remove them and weaker schools will grow weaker still.”

COVID JABS FOR KIDS: A 14-year-old in Essex has become one of the first children in the country to receive a Covid-19 vaccination in school. Jack Lane said he was “proud” to get his vaccine at Belfairs Academy in Leigh-On-Sea on Monday morning, as England and Scotland started rolling out jabs to school children aged 12 to 15.

CHILDREN’S COMMISSIONER REPORT: Dame Rachel de Souza, formerly of this parish, has launched the findings from this summer’s “The Big Ask”. The report is her first major initiative since her appointment in December. As part of a “comprehensive” three-year catchup package for schools, she calls for improved services for children struggling with attendance, faster implementation of tutoring support for those who have lost out most, and a voluntary extension to the school day – known as a “third session” – for catchup as well as sporting and enrichment activities.

NEW HEAD OF EXAM REGULATOR: This week sees Dr Jo Saxton take up her position as the new head of the exam regulator, Ofqual. Given the exam challenges of the last couple of summers, she starts at a time when a huge number of issues relating to next summer’s exams need to be resolved, and quickly!

SILENT CORRIDORS: Nathan Burns has written a stonking piece about this completely uncontroversial topic, and why he changed his mind and embraced the silence.

“At the time, I thought it was a ridiculous idea – we already require students to be quiet in lessons all day, and now we were going to ask them to be silent in between lessons, too. When were students supposed to interact with their friends, have a breather and relax if they were always trying to keep silent? Fast forward 24 months, and I’m now a complete convert. What changed my mind? For one thing, I moved schools. For another, we had to face the small matter of a global pandemic.”

“…we set out to explore the role schools can play in enabling young people to resist joining extremist or violent groups, and the ideas they perpetrate. We were also interested to find out what classroom resources and support teachers need in order to address extremism. To this end, we carried out a literature review, a survey of teachers in schools in England and interviews with teachers in five schools, as well as with a Prevent education officer.”

BEHAVIOUR POLICIES IN MULTICULTURAL SETTINGS: Dan Worth looks at the challenges of creating coherent behaviour policies in international multicultural schools.

“In Thailand, a student may avoid eye contact when being told off by a teacher as a sign of respect. In some West African nations, a thumbs up is a rude gesture. In other nations, a child speaking to an adult before being spoken to is considered impolite. Such differences in cultures may be fascinating from an anthropological view but, for international schools, the various ways in which different behaviours are interpreted, what “good” behaviour looks like and what is deemed a suitable punishment, can make creating coherent behaviour policies tough.”

And that’s the picture so far this week – have a good one!