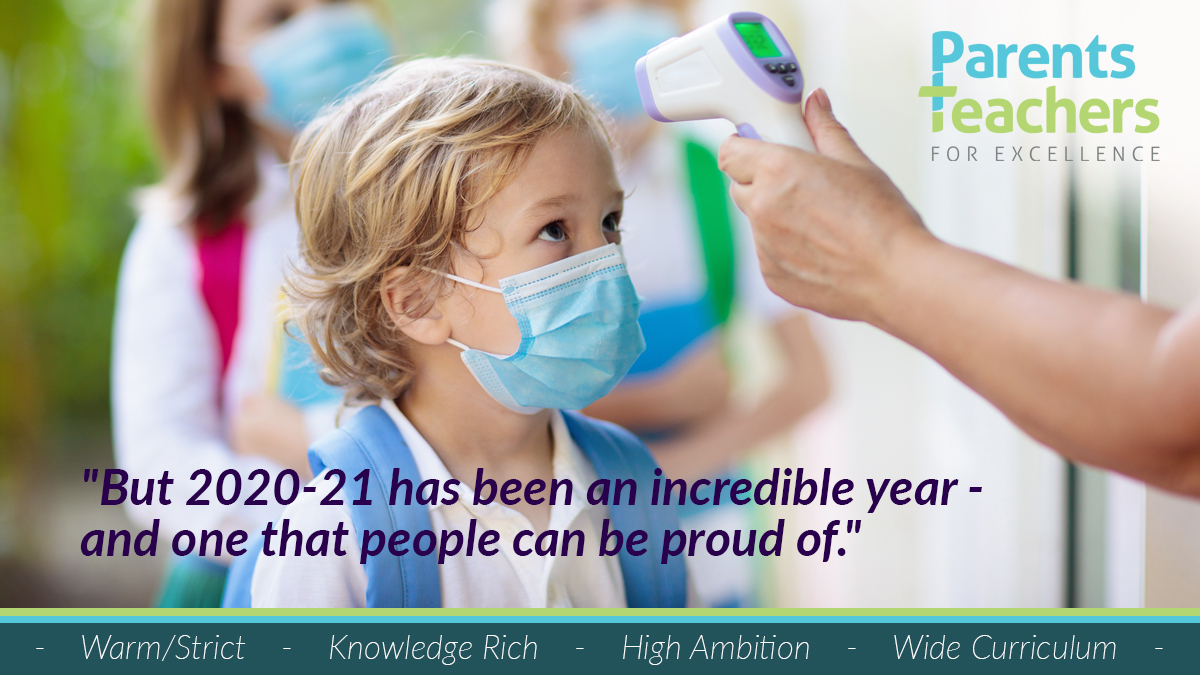 20th July 2021
By Parents and Teachers for Excellence

This is the final newsletter of the term. And what a term it has been!

There have been many stories recently about the “pingdemic” afflicting wider society, but this is really just everyone else catching up with what has been going on all term in our schools.

It’s been another year quite unlike any other in living memory, and no one can doubt that things would have been a whole lot harder for the country if schools had not pulled out all the stops to keep going.

Young people have, in spite of all the disruptions, consistently received an education thanks to their teachers, be it in a classroom or remotely. Parents have been more able to continue working than previously, or had more help in supporting home schooling. It is probably only when things are more back to normal that we’ll all be able to properly appreciate the enormity of what has been accomplished by everyone…

Of course, it’s been far from smooth at times, and lots would be done differently if  – gulp – we saw a repeat of things. But people got through, the kids have shown admirable resilience, and now there is the opportunity for some sort of rest and recuperation.

For one final time this term then, here’s the PTE newsletter!

It really has been quite the year for everyone, including the young people, parents, and teachers at or involved with schools.

Right from the go last September things were rearranged to try and minimise the risks to people. And so we all had to do things in schools so differently, including:

First of all, the debate about the review of Initial Teacher Training (ITT) rumbles on. On Saturday the five main education unions and Chartered College of Teaching sent a joint letter to Schools Minister Nick Gibb calling for an “immediate halt” to things, arguing that it would “cause fundamental and irreparable damage to the supply of high-quality teachers.” Fighting talk!

In Schools Week, Ian Mearns MP asks “Does government want a market or a monopoly?”, with some scathing criticism of the entire process by which the review has been conducted so far – including the research base it is built upon: “Worse still, of the more than 70 references to “evidence” peppered throughout (some a dozen years old), many are government publications or government- funded research. One is an American organisation called ‘Deans for Impact’, which no-one I asked knew anything about. Another is an article from an equally unknown American journal called Mind, Brain and Education.”

It is going to be fascinating to see how things unfold from here. Importantly though – YOU can have your say on things. The DfE is consulting on the proposals – and you can take part in this by clicking HERE. We think that there is much to like in the recommendations, but it is vital that people take the chance to shape things from here, so we would encourage everyone to read up and make a submission.

As we enter the very final week of the English school year, with the remaining schools, and Parliament, closing for the summer by Friday, the Department for Education seems to be getting as many announcements out as possible…

The next batch of fifty schools to be rebuilt or refurbished as part of the government’s 10 year rebuilding plan has been released. For those benefiting, it’s wonderful news to receive and means they can go into the summer with a spring in their step.

1300 more small schools in remote areas will be eligible for “sparsity factor” funding in 2022/23. This is money that is allocated to schools as part of their“funding formula”, and is designed to recognise the fact that such schools are more expensive to run as they can’t operate the economies of scale of other schools.

The Department for Education outlined yesterday how cash will be allocated in 2022-23, including what individual schools would receive if every council adopted the “hard” “funding formula”. The DfE said it would ensure “marginal differences in sparsity distances do not result in significant differences to a school’s funding,” and reduce the risk of “in-year fluctuations in sparsity eligibility having a significant impact”.

Something that will affect every state secondary school in the land was the announcement that exam performance tables will return next academic year.

They had been suspended for two years because of the Covid-19 pandemic, but are being reintroduced, with the DfE saying “after two years without publication of performance data, it is important that this information is publicly available to parents and students to support them when choosing schools and post-16 institutions, given the importance of qualification outcomes to student progression”.

Recognising that there will have been “uneven impact on schools and colleges of the pandemic”, there are going to be “clear messages” attached to the tables so that people are careful to not draw undue conclusions from them when they are published. It will be interesting to see how the decision goes down with people.

And something that affects every school open this week, full stop, is that schools are not being asked to provide the Department for Education with figures for Covid related absences. The website used to upload these figures has been closed. One less thing to have to do in the last few days…

It has emerged that data from one of England’s most prominent academy chains was published on the “dark web” after it refused to pay a ransom to hackers, who at one point demanded $8 million! The Harris Federation, with 38,000 pupils in 50 schools in London and Essex, suffered the cyberattack in March, when criminals accessed and then denied them access to lots of their data and IT systems.

Harris’ Chief Executive Sir Dan Moynihan: “they’d indicated that they wanted $4 million in cryptocurrency. It struck me as completely insane. I mean, we are a group of schools operating in disadvantaged and challenging circumstances for students from low incomes. Why would anybody want to take or think it’s appropriate to take money from youngsters in that situation? We’re about turning around failing schools and changing lives. It struck me as utterly, utterly nuts.”

Much more of this story is told on File on Four, available online here – it’s fascinating!

And finally for this term – there’s a fun piece in the TES by Colin Dowland on ways to nudge pupils towards quality gifts for their teachers: “it’s time for teachers to put a bit of directed time into planning a final week of lessons that will ensure you receive some well-deserved, high-quality and (crucially) really wanted end-of-term gifts from your pupils… [else] you’ll just end up with a random collection of unwanted objects: a furry gonk that looks like Michael Gove or a seventh giant mug that says “World’s Best Teacher”…”

That’s it for this term. May your summer break be long & restful.