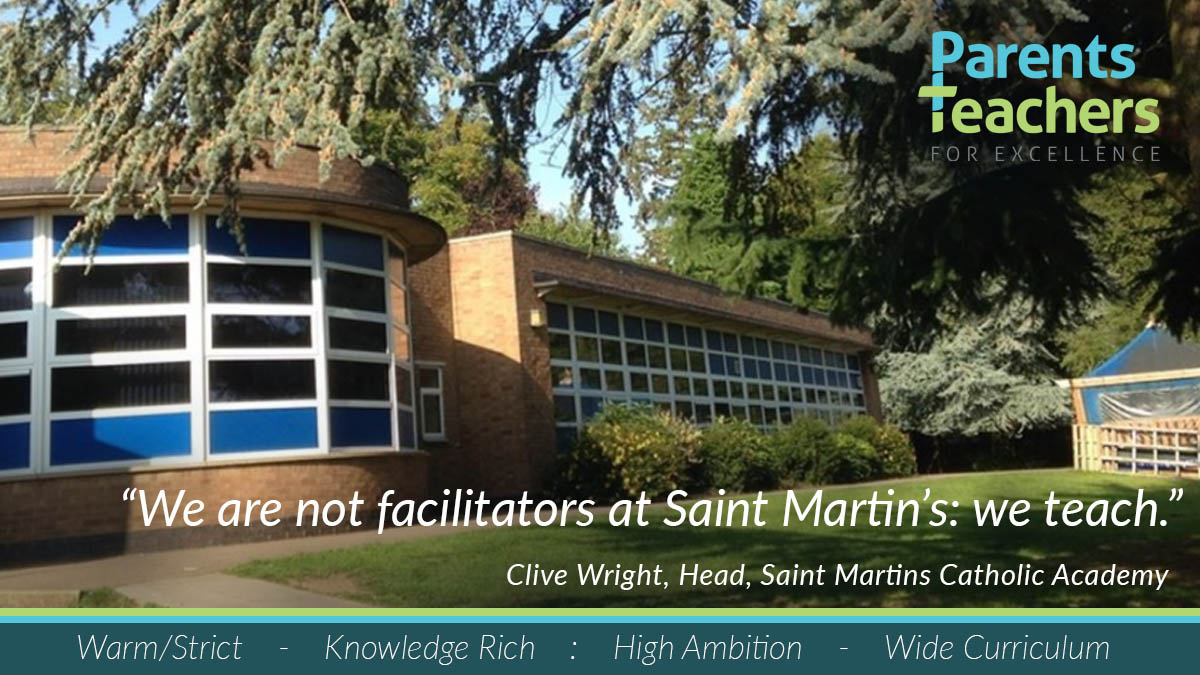 14th September 2021
By Parents and Teachers for Excellence

Clive Wright is Headteacher of Saint Martin’s Catholic Academy in Stoke Golding. In recent years Saint Martin’s has changed – not only in terms of age-range and size, but also in its “what” and “how”. We’re delighted that Clive has written for PTE about the journey the school has been on, and the things that he thinks have made a real difference along the way.

Here in part 1, Clive looks at Saint Martin’s approach to vision, discipline, and the role of the teacher…

As a new Headteacher, seven years ago or so, we embarked on what was then regarded as a slightly eccentric approach to secondary education, knowledge-rich with traditional teaching and expectations of exemplary behaviour. On my own educational journey, I had embraced the orthodoxies of my teacher training and the other progressive trends that were normal in schools ever since I began teaching in the early 1990s. I had emerged from, at times a quite heartfelt commitment to everything from Learning Styles and a belief in the efficacy of Group work, to 21st Century Learning and the creation of complex, multi-media, differentiated and fun lessons.

Then, in a semi- Damascene conversion, after reading Daisy Christodoulou’s Seven Myths and Joe Kirby’s blogs, followed by a plethora of other great educationalists, I began to interrogate my long-held assumptions about what made for a great education.

For me the most influential in this new educational world view were thinkers like E.D Hirsch, Willingham, Englemann, and more home-grown educationalists like Tom Bennett, Daisy Christodoulou, and Katharine Birbalsingh.

So, after being appointed to Saint Martin’s Catholic Academy in Leicestershire in 2014, with a great group of colleagues I began to implement some of the ideas I had encountered.

I was in the slightly unusual position of having to convert a very small 11-14 school of fewer than 300 pupils, to one of eventually 800 and in the process introduce them to GCSEs for the first time.

It’s been quite a journey. Looking back over the last few years, I think there are some important elements that enabled us to manage all the changes and at the same time become one of the top performing schools in Leicestershire. I describe them below and hope you might find what we’ve learned useful and of interest.

1. Vision and the bedrock of some amazing staff

“Where there is no vision, the people perish” Proverbs 29:18.

The vision set out was founded on a remarkably harmonious combination of our Catholic ethos and the principles expounded by Hirsch and others that Education is about social justice; that a school should enable any child, from any background or ability, to access the ‘Best that has been thought and said’; to be the inheritors the collected ideas and wisdom of those who have gone before us.

That education, and what we do every day as teachers, should drive social mobility, and give a child from a deprived background the same opportunities as one who is blessed with more advantageous circumstances in life. In other words, our school should make a difference to the lives of the children we teach and especially the least advantaged.

I was also blessed with an amazing group of teachers and senior leaders who embraced the change and drove it forward in imaginative and interesting ways that I could never have predicted. I have extraordinary colleagues without whom pupils would not have been able to have the success they did and do.

As it says on the tin, pupils have to behave. In fact, they have to be polite, charming, and well-mannered at all times. Pupils have to exhibit exemplary behaviour in lessons. Any disruptive pupil is removed and sanctioned. It is the responsibility of the Leadership Team to ensure good behaviour throughout the school.

If a pupil misbehaves it is not because a teacher’s lesson isn’t ‘engaging’ enough, it’s because the child has chosen to be misbehave. Even if a lesson is particularly dull, heaven forbid, pupils must still behave. READ MORE HERE

Following its interview last week with the former head of the Department for Education, Jonathan Slater, Schools Week has published an interview with the departing national director of education Sean Harford.

It’s another piece worth reading – he makes the case for inspections to have more people in schools for more time, and stands by his previous comments about the National Education Union.

‘Harford made headlines in 2018 when he tweeted that the National Education Union was “impossible” to work with because of its constant calls to abolish Ofsted. He later left the social media platform. Three years on, he has no regrets “because it’s true”. It is “common sense” that if you “have a stance to abolish an organisation then it makes it harder to engage.” While other top Ofsted officials continue to have informal discussions with the union, Harford admits he didn’t experience the same “fleet of foot dynamic” with the union since its reorganisation.‘

NEW EXAM GRADES FOR 2024: the i newspaper reports that the government is targeting 2024 to introduce new numerical grades for A-levels. Apparently ministers believe that resetting A-level standards would benefit from the introduction of numerical grades to create a ‘break with the past’ and ‘signal’ that the qualification has changed from the pandemic years.

EXAM GRADES 2022: With the exam regulator Ofqual still yet to confirm how exams will be set, marked, and graded next summer, last week the headteacher union ASCL came out in favour of returning to 2019’s pre-pandemic pass rates. Now ASCL’s boss Geoff Barton, who originally opposed such a move, has written in more detail about why he’s changed his mind and thinks it’s the best (or least bad) option from here.

“Employers, universities and the wider public appear to understand and accept that 2020 and 2021 were exceptional years, when circumstances meant the system of assessment – and therefore the grading profile – were different than in normal years. But they may be less able to understand and accept why what was exceptional should then become the new norm forever afterwards, and the danger is that this would undermine public confidence.”

COVID JABS FOR KIDS: Teaching unions have warned that schools must be kept out of any potential controversies over Covid vaccinations for older children after government scientists finally approved the mass rollout of jabs for 12- to 15-year-olds. Paul Whiteman, general secretary of the National Association of Head Teachers, said teachers were being put in an “invidious”position and called on ministers to confirm the programme would be overseen by specialist medical teams.

Schools Week reports how schools are being threatened with legal action and told they could face fines of up to £20 million or “life imprisonment” by campaign groups opposing on-site Covid jabs for pupils. It’s all quite tricky.

A-LEVEL SUBJECT DIVERSITY: There’s a new report out from the Education Policy Institute, commissioned by the Royal Society, investigating how the range and combination of subjects taken at A-level has changed since the Gove reforms a few years back.

The findings make for interesting & thought-provoking reading – and Schools Week has a useful summary of the key points.

OXBRIDGE: The head of a Cambridge college has said the university should take 93 per cent of its students from state schools — a change that would slash the number who are privately educated.

Dorothy Byrne is in her first week as president of the all-women’s Murray Edwards College, and in an interview has said the proportion of state-educated students should be representative of society as a whole. She also said “private school students need to get over their obsession with getting into Oxford and Cambridge.”

SEND PUPILS & “SLANT”: Liz Hawker argues that schools should not insist on pupils following the TLAC-inspired “SLANT” technique as many with SEND will be unable to comply – and suggests alternative approaches, including:

“Vary seating according to need, with chair bands, wobble cushions, wiggle seats, peanut-shaped balance balls or bean bags. If we want our classrooms to work for all our pupils, the furniture needs to be diverse, giving them the chance to stablise, move, create resistance or get sensory feedback. “

“Research suggests that we forget 40 per cent of information the day after teaching, and 90 per cent within the first month – so gaining full marks on an assessment immediately after teaching is no guarantee that learning will be retained in the longer term. By adapting our classroom practices, we can support children’s working memory and improve learning retention.”

ALUMNI AS TRUSTEES: Liz Dawson, director of governance at Ark Schools has a piece explaining why Ark Schools is inviting former pupils to join their board and governing bodies.

“Our mission to transform lives through education doesn’t end when a student leaves school, and our relationship with alumni is two-way, so we know that their insight will strengthen our decision making.”

That’s quite a range of topics today – here’s to a smooth rest of the week!