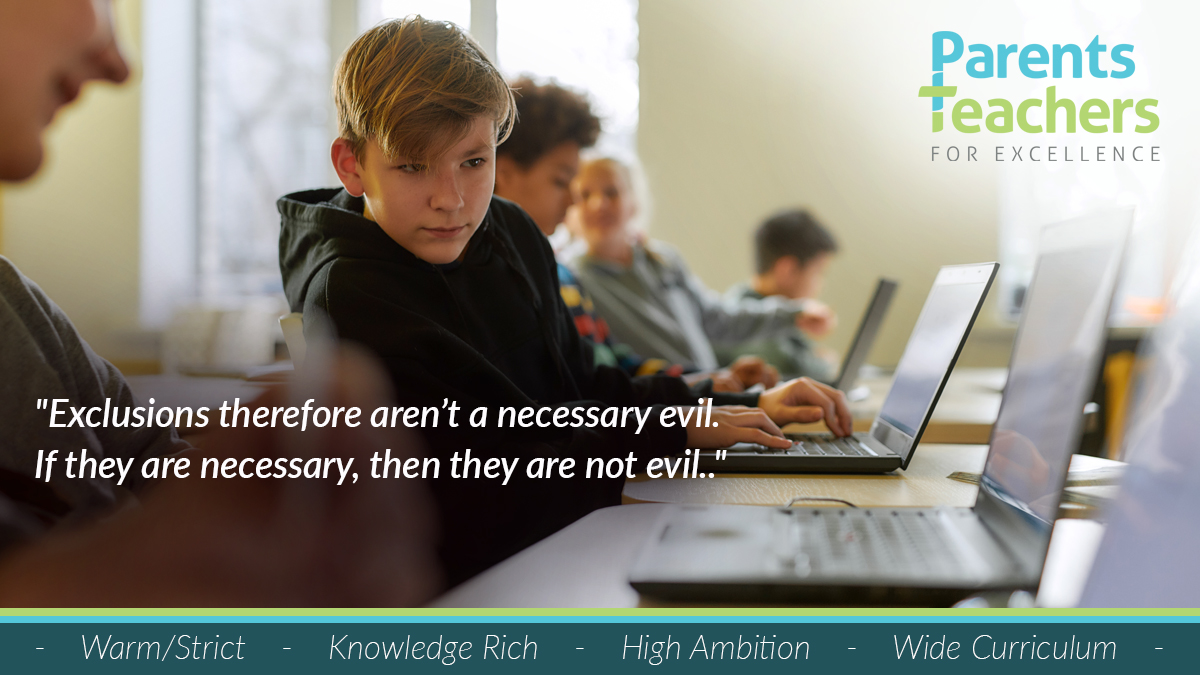 13th July 2021
By Parents and Teachers for Excellence

Well… football wasn’t coming home after all. But even the Italian goalkeeper can’t stop the summer holidays from arriving very soon for everyone.

Between now and then though, there’ll no doubt be quite a bit of education news to contend with anyway. Plus a few sports days, prize givings, and end of year assemblies. Lots of things that remind parents and teachers and pupils of the best aspects of school life.

At PTE we believe Warm/Strict approaches are key to a great school culture and the best way to get the most out of, and for, pupils.

If we get the culture right so many other good things happen. Partly this is because far fewer bad things happen to get in the way – fewer minor incidents occur, and of those, fewer escalate and become major incidents. It’s a virtuous circle, and a joy to behold when it happens.

However, schools exist in a world of real people who are not perfect.

Sometimes, despite all possible support, a pupil will persistently make other children unsafe or disrupt learning. Or they will do something so serious or dangerous that the commensurate consequence must go beyond the standard ones, for the good of that pupil and the wider school community.

After all, above anything else, a school must keep its members safe. An unsafe school isn’t a place where anyone should be. It’s also not a place where learning can take place.

And while unsafe or unruly schools are to the detriment of everyone, they most impact upon those who are more vulnerable or who have additional or specific needs in order to properly include them.

If you’re an anxious child, an aggressive or threatening classmate might be the thing that stops you attending school or pushes you into a spiral of despair or depression.

Or if you have a particular need for quiet lessons and to avoid overstimulation, you will be disproportionately affected by someone persistently disrupting a class, or calling out, or hurling abuse at the teacher.

Unsafe schools by definition are not inclusive. Therefore, if we wish to keep our schools inclusive, we must keep them safe and orderly – and so we have to keep in reserve the ability to remove those who would seriously undermine things for everyone else. READ MORE HERE

First off: those of you in Leicestershire schools are already on your holidays, but the BBC reports on the council consultation being held on proposals to move more in line with the rest of the country. It will be really interesting to see how this pans out.

The exam regulator Ofqual has launched a consultation on its proposals for 2022 examinations. Pupils taking GCSEs, A-levels and vocational exams in England next year are likely to get advance notice of topics, to ensure they are not disadvantaged by Covid disruption.

Announcing the consultation, Education Secretary Gavin Williamson said: “Exams will always be the fairest way to assess students, which is why they will take place next year, but it’s right that next summer’s arrangements take into account the disruption young people have faced over the past 18 months.”

Schools Week has a good “what you need to know” article that sums up the key proposals. TES has a breakdown for the GCSEs with the biggest uptake.

It’s a shame that things haven’t been confirmed before the holidays, to allow for some planning time in advance of the new academic year. The government says it is “aiming to announce our decisions by early September”. Here’s hoping!

The necessity for these adjustments is highlighted by data which shows that secondary pupils in parts of northern England are more than three times as likely to miss classes while they self-isolate as their peers in London. Nationally, pupils missed 21% of sessions last week, up from 17% a week earlier and far higher than the average secondary absence rate of 6% in summer 2019.

In response to the outcry from some teacher training providers, Stuart Lock has written an op-ed for Schools Week: “Histrionics can’t block an historic opportunity.”

He says: “Survey almost any staffroom in the country and you will hear testimony of brilliant teacher training; training that inducted new teachers into vibrant subject communities and balanced, rich academic theory with opportunities to practice and hone teaching craft. But the quality of ITT is too low for too many teachers.”

As well as: “The DfE is consulting on the recommendations and seeking views on how to implement any reform. But instead of provoking an informed discussion about a thoughtful review, many have reacted hysterically.”

It’s well worth a read.

Over in the TES, Schools Minister Nick Gibb has written a piece titled “Teaching early reading well avoids demotivation.” Presumably released in response to negativity from some towards the DfE’s new Reading Framework, Gibb says “It is a testament to this country’s success that we are now inspiring a phonics approach across the world, including Australia, Fiji, Nigeria and a number of Arabic-speaking countries. But there is more to do to ensure pupils of all backgrounds meet the reading standards they need to fulfil their potential.”

In the Telegraph, Stephanie Davies-Arai argues that “Teachers are powerless to resist trans activism in schools.”

She says: “So schools are caught between a rock and a hard place. Implement the policies demanded by activist groups and risk legal challenge, resist such policies and risk the reputation of your school becoming transphobic and non-inclusive.”

Also in the Telegraph, last week Lucy Kellaway – a former journalist for the Financial Times who quit at the top of her game to set up Teach Now & become a teacher – wrote about why she thinks super strict schools are on the rise:

“It’s no secret that strictness and results are linked – and as schools are now judged entirely on exam results, more are copying the super-strict model. But in this scramble for better grades, is there any such thing as too strict? It seems there isn’t. I’ve visited schools that have only half adopted the rules – they have line-ups and uniform checks, but still allow students to talk in corridors – and their results aren’t as good as those of the more extreme schools.”

Here at PTE we’re big fans of a longer school day, as we believe it allows more time for the really good, enriching stuff that every child should experience. We know that the government is considering a longer day too – but are struggling to get the Treasury to finance it.

Laura McInerny has used Teacher Tapp data to look at what schools are already doing, and it’s interesting, including: “At present, one in 20 primary schools finish lessons before 3pm. The number is slightly higher than in the past because so many primary schools are running staggered end-times so that pupils aren’t crowding out at the same time and passing the virus between bubbles. For secondary schools, the figure is closer to one in five, with 18% closing before 3pm. Those in the most deprived areas were more likely to shutter early, with 29% closing before 3pm, which feels like grist to Williamson’s mill.”

Lots to ponder as we get over England’s footballing disappointment – or bask in Italy’s glory. Have a great week.