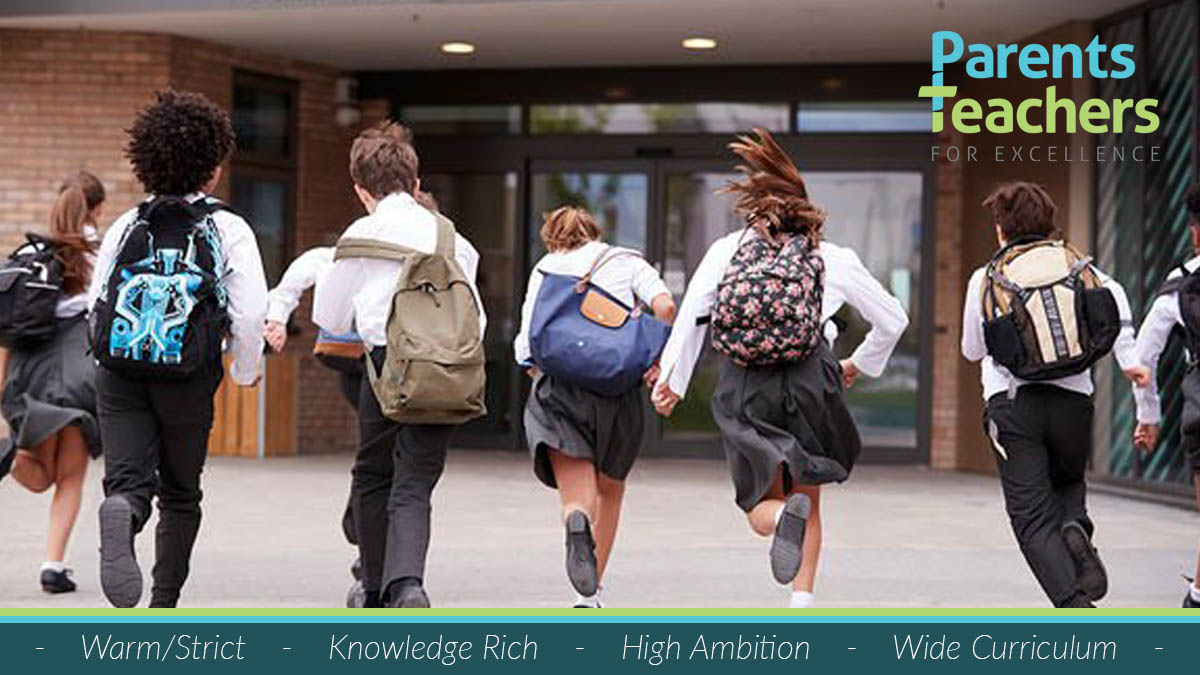 7th September 2021
By Parents and Teachers for Excellence

Welcome to the new 2021/22 academic year. Despite a very British summer we hope everyone had the opportunity for a break, a rest and a chance to catch up with friends and family over August.

Back to school, back to reality

Some schools returned a few weeks ago, but with all parts of the country now back into the swing of things, it’s worth thinking about what awaits in the academic year ahead.

Thankfully many aspects of school life will be different from last term, and much closer to “normal”. With ‘bubbles’ gone and children and staff able to move around more, hopefully the school experience for everyone will be less regimented and more human.

Of course, the biggest difference right now is how positive test results will be handled. Not requiring all close contacts to isolate should mean far fewer children and staff at home, and much less disruption to lessons and learning.

Things being well, it means schools can focus much more of their energies what they do best: creating a great culture so young people can experience a great curriculum and become the best version of themselves.

We know though that it won’t all be plain sailing. People will have to isolate, and schools will have to continue to enable remote teaching and learning. READ MORE HERE

The seasons might be changing but the topics dominating education news and views remain the same as they have been for a while now.

EXAMS: This morning it was confirmed that we won’t, after all, find out this month everything that the exam regulator Ofqual has in mind for exams next summer. Ofqual’s leadership told the Parliamentary education committee today that decisions on grade distributions in 2022 will be announced next month.

The i reports that ministers are drawing up “contingency plans” if pupils are unable to sit GCSEs and A-levels as a result of the ongoing Covid-19 pandemic. Schools minister Nick Gibb also confirmed that the Government will look at overhauling the grading system in the future in a bid to control grade inflation following two years of teacher assessment.

Related to this, the new leader of the Girls’ School Association has said that England’s school exam system needs an overhaul to lower the mental burdens they place on teenagers striving for the “holy grail” of results. Samantha Price, head of Benenden School in Kent, wants reforms on how and when students are examined, including a possible delay to the start of degree courses until January rather than autumn, to allow students more time to make course applications, do work experience and learn skills such as financial literacy.

ATTENDANCE: The government is being threatened with legal action if it fails to update attendance guidance for vulnerable children and families during the pandemic. The Good Law Project has written to Education Secretary Gavin Williamson asking him to issue guidance that protects vulnerable children and families, arguing the current rules are unlawful.

COVID MEASURES: Schools have been told to place new carbon-dioxide monitors in places that are “constantly stuffy or smell unpleasant” because these are likely to be under-ventilated. The advice is included in new guidance that the Department for Education has sent to schools, explaining how to use the new monitors in an attempt to tackle the spread of Covid-19.

However, it is reported that only 41 schools in London are due to receive these CO2 monitors this week, with just 517 devices due to be sent out, according to a schedule sent to schools. The government announced last month that it would provide around 300,000 carbon dioxide monitors to state schools to help them tackle poor ventilation.

WIDE CURRICULUM: Head of Ofsted Amanda Spielman has urged schools to make time for sports, trips and clubs or risk prolonging the ‘loss’ of social skills caused by lockdowns. In an article in the Daily Mail, she suggests heads could extend the school day to bring back ‘once cherished’ activities like football, drama club and music. She says there are ‘rising health concerns’ about pupils who have ‘lost out’ on developing social skills and had few opportunities to ‘overcome shyness or lack of confidence’.

UNIFORM: It’s the season for stories about pupils being turned away from school or disciplined due to not having the correct uniform. Jarlath O’Brien has a thought-provoking article on the topic in TES.

“What is not fine, though, is where we hold children to a higher standard than adults. We may do this in a number of ways… Not having a branded skirt spells trouble, even if the skirt the child is wearing is fine. Getting into bother for something that is not disruptive or that is actually normal ignites children’s sense of injustice.”

ITT MARKET REVIEW: In Schools Week, Institute of Education academic Sam Sims challenges some of the criticisms directed at the ITT review. However, he says that delivering on its promise will require some changes from ministers.

“To begin with, the proposed timeframe for reaccreditation is too short. Consolidation is undesirable for almost all providers, which risks them pulling out. And the intensive practice placements require additional funding. These issues can be fixed with the flick of a ministerial pen. More fundamental is the concern around the academic freedom of universities delivering the CCF. Oxford and Cambridge have threatened to pull out altogether.”

Finally, The Guardian has a leader column today on schools, titled “ministers failing children” – so you can probably imagine the angle it takes: “Gavin Williamson is a weak leader. But families and teachers have been let down by the government as a whole.”

That’s all for now – have a smashing week!