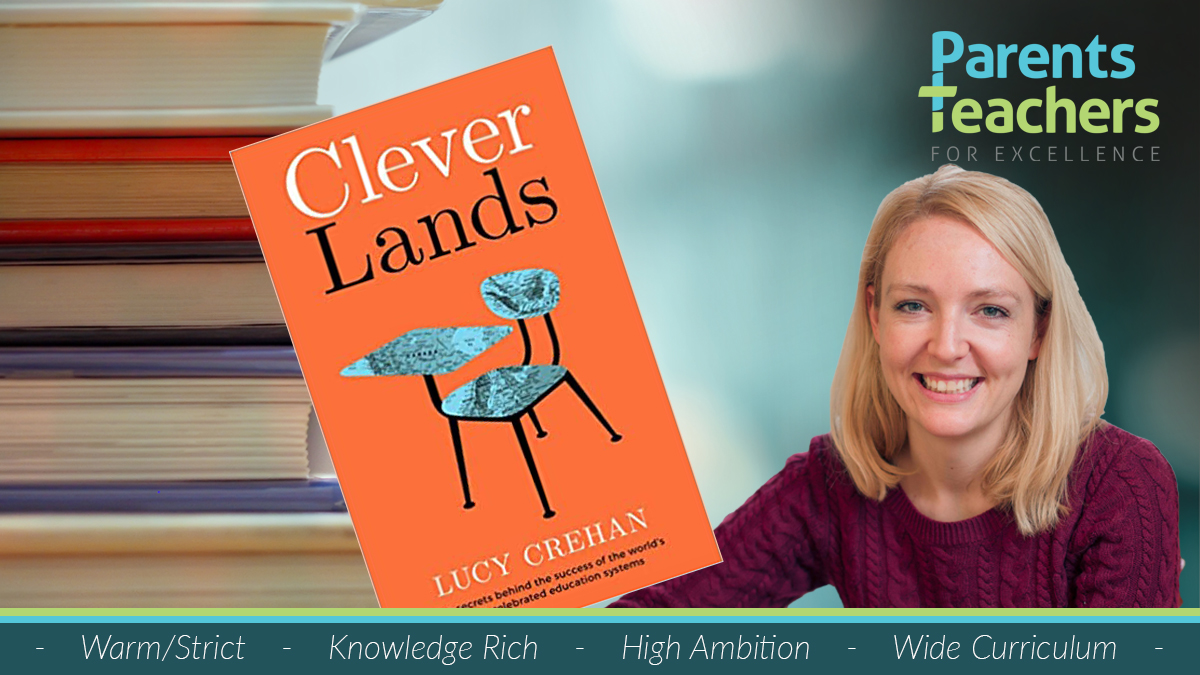 9th July 2021
By Parents and Teachers for Excellence

And regardless of whether you’re stopping for the summer or just the weekend – here’s to a restful couple of days, and maybe – just maybe – football coming home…

Lots of commentary about schools in the UK is about comparisons with other countries’ educations systems. All-too-often, we’re told how poorly we are doing versus the “best” and that we should change X or Y to emulate their success. But what do the “top performing” countries actually do with their schools, and what lessons can we really take away from them?

“Cleverlands” is an attempt to answer these questions and more, and grew out of a ‘geeky gap year’ that its author Lucy Crehan spent visiting schools in a number of countries. The result is an extremely readable book, covering five countries of interest: Canada, Finland, Singapore, Japan, and China (Shanghai). By bringing together her experiences with research on policy, psychology, history, and culture, fascinating insights are gained into what we can learn from these places.

On her travels she spent time living with and talking to teachers, to get beyond the official spin on things and understand how things really worked for pupils and teachers. READ MORE HERE

Tuesday afternoon we all finally found out how Covid rules for schools will change when the country moves to step 4 of unlocking on July 19th.

Bubbles will be scrapped, as will the need for face masks, social distancing measures and staggered start and finish times. Secondary schools will be asked to offer pupils two Covid tests at the beginning of the autumn term, as a one-off.

From August 16th young people, like the rest of the population, will only have to isolate if they test positive for Covid themselves. This can’t come soon enough, especially in light of analysis from the London School of Economics and Exeter University that shows that the pandemic caused pupils in the UK to miss on average just over a third of an academic year in terms of teaching days.

Whilst many breathed a sigh of relief at the news, not everyone is happy about the changes. Yesterday the National Education Union wrote to Education Secretary Gavin Williamson calling on him to explain why the government is to remove Covid safety measures in schools during a period of rising case counts and deteriorating levels of self-testing amongst school-age children.

Even with Covid requirements gone, schools have been told that they have to have “outbreak management plans” ready to go, in the event of clusters of cases occurring within them or the local community. Dan Worth explores what this means in the TES: “This is not a new requirement per se, but for many it will require some serious redrafting of what already exists or creating something new if they had not produced their own document yet.”

He went on to say: “How you do it, what sort of activities – is it enrichment, is it academic – what’s the mixture? We are doing a proper review of all of that to get the evidence that we want.”

The British Council has found in its annual survey of English primary and secondary schools that more than half of primary school pupils and 40% of those at secondaries did not do any language learning during the first national lockdown. And in January and February’s lockdown, one-fifth of all pupils had no language education. They think that it is inevitable that this will affect take-up at GCSE and A-level, and impact on the government target of three-quarters of pupils taking a modern language GCSE by 2022.

Department for Education research out today suggests that teenagers who score one grade higher than their classmates across nine GCSE subjects are likely to earn up to £200,000 more in later life. They can expect to gain ‘significantly’ higher wages across their careers. The findings have established, for the first time, a link between attainment and lifetime earnings. The full research paper can be found here and makes for interesting reading.

Ofsted has released a new “research commentary”, this one on “teaching about sex, sexual orientation and gender reassignment.” It’s well worth a proper read.

It found that “the overwhelming majority of schools were asking for much more specific guidance about sexual orientations and gender reassignment, both for schools and for parents…”

Also: “For example, school staff can occasionally confuse the legal, the moral and the political, and so (often inadvertently) bring overtly political materials into their curriculum and teaching without acknowledging it as such, despite the statutory requirement of political neutrality.”

Obviously it was this aspect that the press focused on, with the Daily Mail headline saying “Schools are using ‘overtly political materials’ to teach children about gender and must be neutral in the face of ‘increasing sensitivities’, Ofsted warns.” Regardless, it’s an issue that isn’t going to go away.

Following a proper grilling on Tuesday, the House of Commons Education Select Committee has endorsed Dr Jo Saxton as the next Chief Executive of exam regulator Ofqual. Dr Saxton, who used to be on the PTE Advisory Council before taking a place on the Ofqual board, will take up her new post in September.

The review into the Initial Teacher Training sector has issued a report and recommendations, and upset quite a few training providers in the process. Oxford and Cambridge Universities have issued statements suggesting they could pull out of the sector altogether, with the latter saying: “These recommendations would compromise the essential characteristics of programmes such as ours, which are already producing outstanding teachers, year after year. We recognise that these are only recommendations. Were they to be implemented, however, then with great regret we would see little option but to review the viability of Initial Teacher Education at the University of Cambridge.”

Fighting talk. Even a member of the review’s advisory group, Sam Twiselton, has shared concerns about how things could go if the recommendations are implemented in full as outlined. It will be interesting to see what the current consultation comes out with and if anything is changed as a result.

Following the announcement last week that Eton College and STAR Academy Trust were going into partnership to open several highly-selective sixth forms in the midlands and north, Tom Arbuthnott of Eton and Lisa Crausby of STAR have co-written an article for TES to explain in more detail the thinking behind the project.

They clearly mean business: “Genuine partnership is evident in our plans for teaching and learning. We will take the academic excellence, pastoral support and social commitment of Star, along with the knowledge-rich rigour of the Eton schoolroom, to create a pedagogy we believe will be distinct in its offering. We intend that our colleges will change lives for disadvantaged children and complement the work to raise standards that already features in these regions.”

Here’s to a relaxing weekend – and perhaps even some footballing success this Sunday evening!