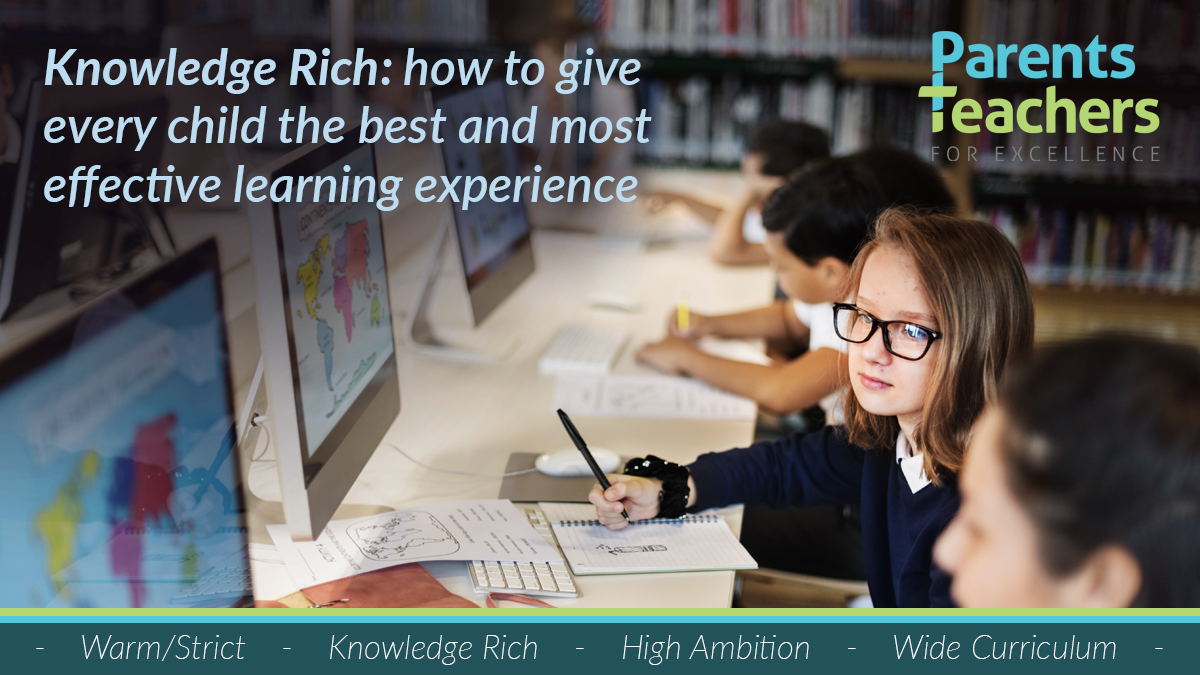 The PTE Newsletter – Friday 7 May

7th May 2021
By Parents and Teachers for Excellence

We hope everyone’s week has gone smoothly. It’s a busy time for everyone involved with schools, this year especially so. Wherever you are, and whatever your role with young people, thanks for everything you’re doing to keep the show on the road.

The Knowledge Rich movement has demonstrated, over and over again, that without such a foundation the child’s ability to go on to learn more complex and advanced ideas, techniques and topics is fatally compromised. READ MORE

The Telegraph reports that the Prime Minister will announce on Monday that secondary school children will no longer have to wear face masks in class. Apparently he will confirm that the Government guidance is changing from May 17, when England moves into the next stage of the reopening roadmap.

There will be mixed reactions to this news. Many teachers will agree with Louise Lewis, who writes in today’s TES “with news headlines reporting increasing numbers of cases abroad, and national absences from school for Covid-related reasons remaining in their thousands – it is apparent that we are far from out of the woods.” And given that the major trade unions have already written to the Secretary of State asking for the requirement to remain for now, it will be interesting to see how things play out.

On a related note, new attendance data from the DfE shows that the number of pupils absent because of potential contact with a Covid case in school has almost doubled in the past week. Just under 47,000 pupils were off last Thursday because of potential contact in-school, up from 25,000 the previous Thursday. The number of confirmed cases only rose from 2,400 to 2,700.

Unions are calling for the government to pay teachers an extra amount this year to recognise the work they are doing to create teacher-assessed grades. Mary Bousted, joint general secretary of the National Education Union, said that teachers “absolutely deserved” a £400 bonus for the extra workload like their counterparts in Scotland.

Geoff Barton, general secretary of the Association of School and College Leaders, said “Instead of recognising their efforts through improved pay, the government has signalled its intention to do the opposite by imposing a pay freeze.”

Hopefully this grades situation will be avoided next year, as Ofqual Chair Ian Bauckham has said that teachers will be made aware of any “significant” changes to the 2022 GCSEs and A level exam series before the start of the next academic year.

The Times reports on the exam board OCR’s consultation asking whether the title of one A-level module, “women in literature”, should be replaced by “gender in literature”, “representing gender” or any other suggestion. It says that this would help pupils better understand the topic. Deputy Head David James disagrees, saying: “To subsume ‘women’ into something vague like ‘gender’ is reductive, but also meaningless because all literature is ‘gendered’ because it is written by human beings. We have to protect what is distinctive about the female experience throughout the centuries. Once lost it will be difficult to reclaim.”

Have a wonderful weekend!