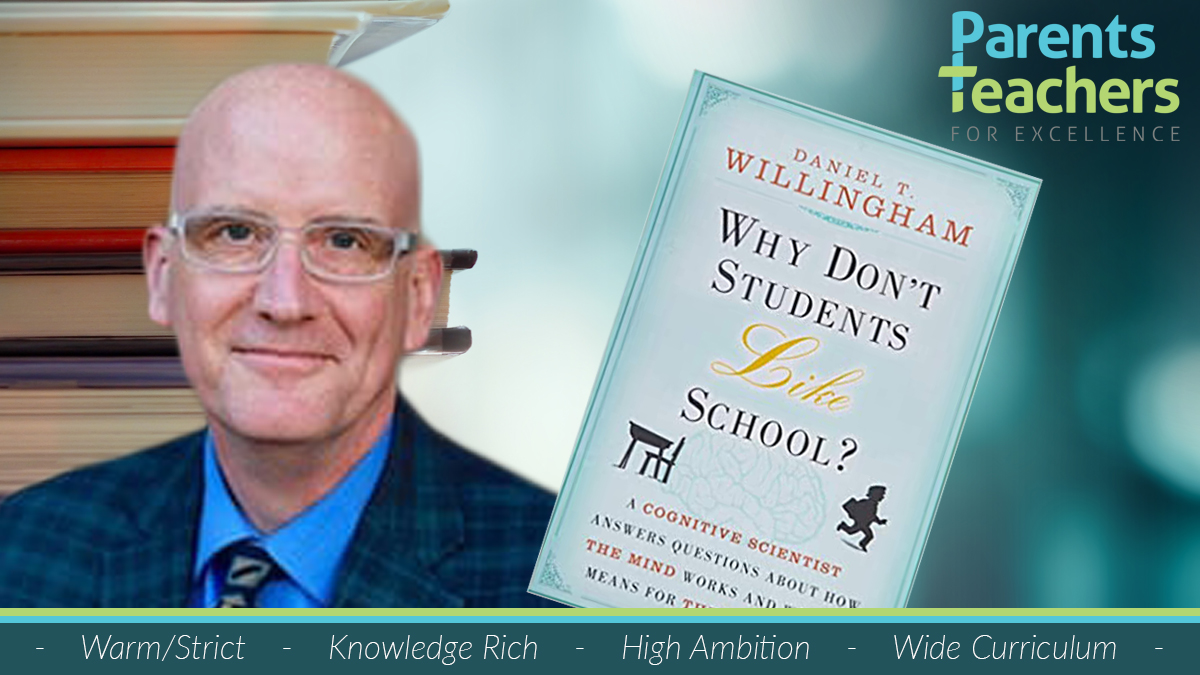 26th March 2021
By Parents and Teachers for Excellence

Some of you will now be on your Easter break – in which case, we hope you are able to get some well-deserved rest & time with loved ones.

And for those of you who are teachers with a few more days to do – may they pass smoothly & your pupils ply you with Easter chocolate.

We have another review of an important and influential book – this week it is Daniel Willingham’s “Why Don’t Student’s Like School?”  The third in our series, we feel it is already building into a useful reference “library” for a parent or teacher who wants to read some of the best that’s been thought and said on education over the years.

“Why Don’t Students Like School?” is, quite simply, brilliant.

It’s a proper ‘Ronseal’ book and does exactly what it says on the tin (slash subtitle): “A Cognitive Scientist Answers Questions About How the Mind Works and What It Means for the Classroom.”

One of its strengths is that Willingham doesn’t hang about.

He kicks off with his key point – cognitive science has made great strides in recent years, but teachers and students haven’t benefitted from these findings, as practice hasn’t adjusted to incorporate them.

He explains why this hasn’t happened – in the lab scientists can isolate mental processes to study them, but in the classroom they’re all operating simultaneously and interacting in unpredictable ways.

Willingham then tells us the good news – in spite of this complexity there are actually nine impactful principles that are so fundamental that they do not change depending on context. Importantly they have practical applications for the classroom and are all backed up by loads of proper research; there’s no folk wisdom or assertion in this book.

And after that – whoosh, you’re onto nine chapters, each one posing a question whose answer is guided by one of the fundamental principles. Read More Here.

A row has broken out regarding the use of images of the Prophet Mohammed from Charlie Hebdo in an RE lesson at a school in west Yorkshire. As rumours spread as to what went on, angry protestors gathered outside the school – and now the police, Department for Education, and others have waded in on the issue too. The school has suspended the teacher in question and apologised for any offence caused, but it seems as though this story has prompted wider questions.

Schools Minister Nick Gibb has not one but two articles out today – the first on the importance of music and its place in the curriculum, and a second where he says “we must not let the pandemic lead us astray from our mission to raise school standards.”

The latter piece was part of a series on post-COVID education, which also had articles by PTE Advisory Council member Jonathan Simons, and former PTE Director Mark Lehain.

On Wednesday Radio 4 had an interesting episode of its “Positive Thinking” series – “Future Proofing Our Schools“. It was a lively but fairly typical run through of the usual 21st century educations tropes, and so it was great to see Tom Bennett, of ResearchED and government Behaviour Advisor fame, review the programme and provide a more questioning take on the issues.

This week has seen the launch of yet another future-looking review of schools. The Times newspaper has launched a grandly-titled “independent commission”to “consider how best to reform educational provision for a generation.”

The commission was initially proposed by Sir Anthony Seldon, the educationist and will be chaired by the Times journalist Rachel Sylvester. Its members comprise experts drawn from education, science and technology, the arts, business and public policy. “What all its members have in common is a non-partisan conviction that merely seeking to restore the status quo ante will not be sufficient to give young people the best chances of success and fulfilment in life.” Let’s see how it all works out.

This summer’s grades continue to generate much discussion. The regulator Ofqual has finally issued guidance to centres about how they should decide and submit grades. It has warned Heads to beware parents putting teachers under pressure to raise grades, and to make a note of any such attempts.

The NEU has said that it is ‘entirely unethical’ for government to be ‘hiding behind’ teachers, who they say will take blame for A-level and GCSE grade inflation. Alongside this, the education select committee has warned Gavin Williamson his exams replacement plan risks being “too inconsistent”, and that there could be a “Wild West” grading system, with committee members demanding concessions to ensure a “level playing field” for pupils.

Have a great weekend.