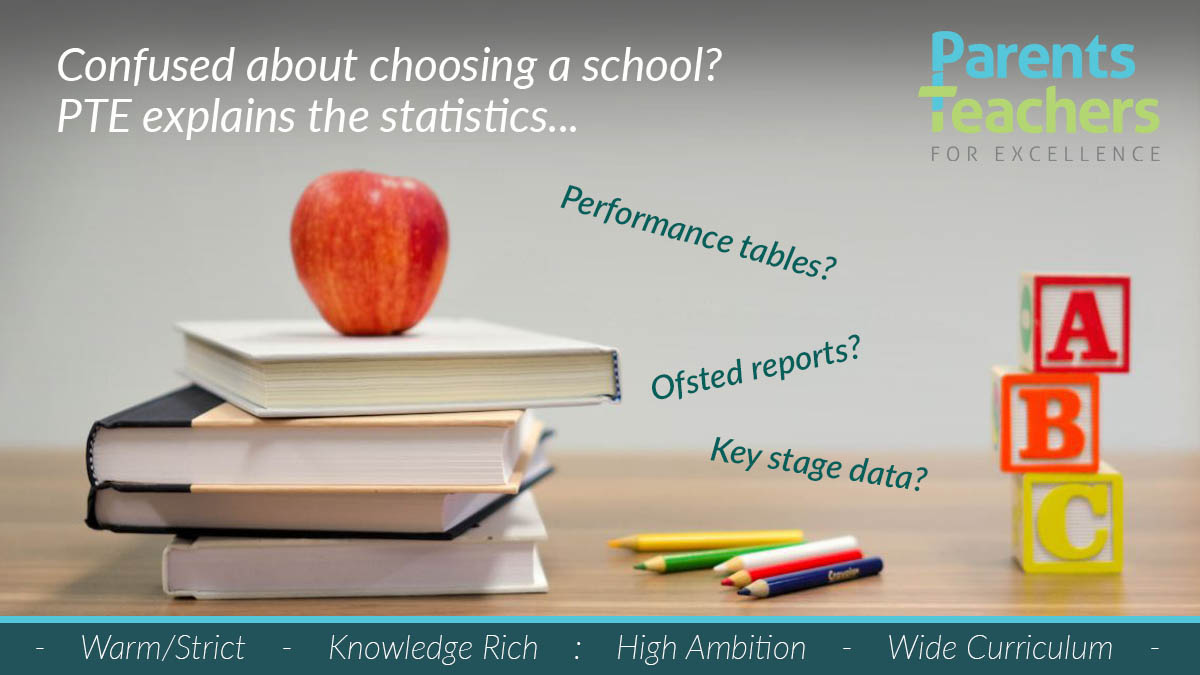 24th September 2021
By Parents and Teachers for Excellence

Where did the week go? How come it’s already Friday?

Hopefully your week has been kind, and the term-time tiredness hasn’t yet got too much. While parents and teacher are getting on with the job of educating kids, politicians in the Department for Education will have been getting up to speed on their new roles.

It will be interesting to see what their first announcements are – and in the meantime, it makes a nice change not having a stream of new things to think about on top of the day job.

Choosing A School: Coming up with a Shortlist

There is no doubt that the best – indeed only – way to get a proper feel for a school is by visiting it during the day. Seeing with your own eyes how staff and pupils get along with one another is vital, as is meeting the Head as they will set the whole tone for the school.

However, before you visit a school there is a lot you can look at to gauge how it’s doing in terms of standards and direction. If you’re in an area that has lots of schools, some research will help you to come up with a shortlist of places so that you don’t have to visit every one. And if you’ve not got many schools nearby, research will also give you a sense of the kind of things to focus on and ask about when you do visit those.

There are a whole bunch of ways of getting a sense of a school before visiting, formal and informal. Next time we’ll examine the informal. Today, we’re going to look at two “official” sources of information: Department for Education Performance Tables, and school inspection reports from Ofsted.

Before getting stuck into these though, a really important health warning: they only give a very partial view of a school, and by definition they’re always at least a bit out-of-date. Indeed, given that exams and Ofsted inspections didn’t occur during the pandemic, they will be pretty out-of-date for a while to come, so it’s important to not put too much emphasis on one or the other.

They are though still a handy starting point to prompt some further questions when you visit places.

The “Find and compare schools in England” site is pretty amazing. You can enter a specific school name, town, Local Authority, or postcode, and it shows you all the schools within that category or a certain distance – either as a list or on a map.

If you search by Local Authority, you will be presented with all the schools, with a tab for each of the different school measures that are published – results at age 11, 16, and 18; absence; Ofsted judgements; and staff and finance metrics. These are the “league tables” people talk about, as you can rank the schools at the click of a button according to their results or absence and so on. READ MORE HERE

OFSTED AND ITT: When the government published its proposals to reshape the ITT market, many providers responded that the Ofsted gradings of the sector proved that change wasn’t necessary.

However, now that a significant proportion of inspections carried out recently have found the quality of provision to be less than good, Ofsted’s “integrity and independence” has been called into question by teacher training leaders. They believe inspections are deliberately aiming to discredit provision “wherever possible” under the new inspection regime.

The Universities’ Council for the Education of Teachers (UCET) has said it is “increasingly concerned” about how judgements are being made under Ofsted’s new framework for inspecting initial teacher training (ITT) providers, suggesting that the corresponding reports are “poorly written” and “reflect a lack of knowledge” about the sector.

Schools Week has written about developments in more detail – the article is worth reading.

LOCKDOWN LEARNING LOSS: The Office for National Statistics has found that the youngest primary school pupils and those in the most deprived areas suffered the greatest loss of learning during the pandemic lockdowns that closed schools to most pupils in England.

The ONS analysis found that schools with the highest proportion of children eligible for free school meals (FSM) faced the biggest struggles in teaching remotely during the lockdowns in 2020 and 2021, which the agency attributed to lower levels of pupil engagement and communication with teachers, lack of internet access and “social problems” associated with deprivation.

Also, unsurprisingly children aged five to seven covered the least classroom material, compared with older children who were less reliant on their parents.

KEIR STARMER’S VISION FOR SCHOOLS: The Labour leader Sir Keir Starmer has said he wants all children to have a chance to play an instrument, join a sports team and visit the seaside by the time they’re 10.

In a new Fabian Society essay ‘The Road Ahead’, Starmer said the country must “help young people from all backgrounds develop their potential”. He said a Labour government would focus “not simply on grades and qualifications, but the so-called ‘soft skills’ that help develop and round young people”.

The essay does not propose any specific policy initiatives, and Labour frontbenchers remain tight-lipped about what will be in the party’s next manifesto for schools.

TEACHER PENSIONS: A group of more than 20 independent schools is “reluctantly” proposing to leave the Teachers’ Pension Scheme (TPS). The Girls’ Day School Trust (GDST) is consulting on the change, and if it proceeds it will be the latest to join a growing number of private schools choosing to leave the TPS after the government raised the rate of employers’ contributions by 43 per cent in 2019.

While state schools are covered for this increase, for now, independent schools are not, meaning that some schools either have withdrawn or are considering a withdrawal from the scheme to cut costs.

“Take North Shore Academy, for example, whose Ofsted report was published recently. This is a school in an area of significant disadvantage that had been “inadequate” or “requires improvement” for a long time. It’s now an “outstanding” school under the leadership and support of Northern Education Trust, which used the capacity and expertise that it possesses across the trust to support the school to deliver for its pupils.

Don’t tell the families of Stockton-on-Tees that structures don’t matter.”

ANTI-VAXXERS AND SCHOOLS Vic Goddard of Passmores Academy fame, writes about the pressure schools are being put under by activists since vaccines for 12-15 year olds were announced.

“Within hours of that announcement, I had received five emails and letters informing me that I was ‘formally put on notice’ due to my compliance with government policy in relation to Covid. The first one featured lots of mentions of St George and the crusades, and it would be easy to laugh it off, except that as I write this we have reached double figures and their sources are increasingly varied.”

PAY TEACHERS MORE Jack Worth argues that there is a cold, hard logic to paying teachers more – the recruitment challenges that have become even more pronounced as the economy recovers from lockdowns.

“…why is there a need to push hard for pay rises for teachers, especially those entering the profession as new teachers? In short, because just as the spending review gets underway, the teacher supply ground has shifted dramatically once again.

The wider labour market has come roaring back to life, more quickly than anyone expected. In spring, economic forecasters thought the labour market might not return to normal until around 2024. But now they think it is already back: vacancies in the economy are higher now than they were before the pandemic.”

That’s the situation as this week draws to a close – have a wonderful weekend!