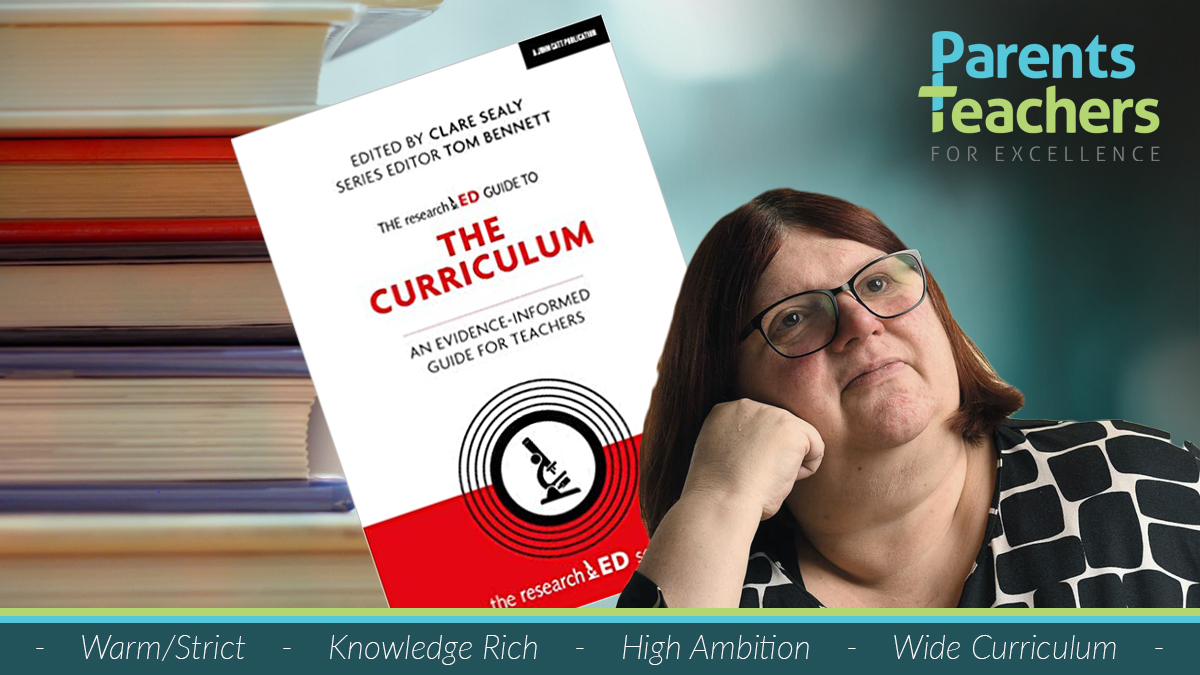 2nd July 2021
By Parents and Teachers for Excellence

Covid, and the pupil absences it is causing, has dominated the news this week. Thankfully schools around the land are holding things together & keeping the show on the road. It’s probably fair to say that the holidays can’t come soon enough – so here’s hoping the government shares its plans for the autumn before schools break up for the summer!

PTE Book Review: ‘The researchED guide to the curriculum’

researchED started life as a one-off conference where teachers could engage with evidence, and consider how to bridge the gap between research and practice. It’s since grown into an international movement, with events all around the world.

Those who have attended researchEDs will rave about them – but not everyone can get to one as life is already busy enough. With this in mind it has started to publish a number of books covering key aspects of education, with Tom Bennett, researchED’s founder/Godfather/behaviour guru, overseeing things as series editor.

“The researchED Guide to The Curriculum: An evidence-informed guide for teachers” is part of this and is absolutely brilliant. Edited by Clare Sealy – one of the best thinkers and writers on the topic – it explores the most pertinent challenges teachers face when considering the curriculum for their pupils. As Clare says in her introduction:

“It is about how we choose what we will teach the students in our schools and why those choices are important. Every time we choose to include something, we are also choosing not to include many other possibilities. The responsibility inherent in choosing some material rather than others can be intimidating. Our choices are always contestable. But choose we must.”

The book is then made up of nine chapters by nine superb thinkers and teachers – with the very first chapter written by none other than Michael Young, of “powerful knowledge” fame. READ MORE HERE

First – it has been announced that Unity Howard is stepping down as director of the New Schools Network, the charity that helps groups bid for and open new schools. It’s sometimes forgotten now quite how significant a change we saw in England a decade ago when charities, parents, schools, and others were allowed to directly bid to open and run state schools – and NSN was an integral part of that revolution.

The issue of pupils having to isolate due to positive test results in their school “bubble” has continued to dominate the education news this week.

Official figures showed that 375,00 pupils have been isolating this week, and with positive test results still increasing across the country, this number is expected to rise further still.

Education secretary Gavin Williamson has said that he will be able to confirm plans to lift restrictions and bubbles as part of step 4 of the government’s Covid roadmap. This will mean some schools will already be closed to pupils for the holidays before the announcement is made. It hasn’t been made clear if changes will kick in from July 19th, or stay in place until September.

Conservative MPs are putting pressure on the government to lift school restrictions ASAP – but unions are warning against this, worrying that it will put their members at undue risk.

Pupil absence is clearly a big worry though. Official statistics out yesterday showed that pupils on Free School Meals had 30% more days off in the autumn term than their better off classmates. One imagines that it has been similar since then too – heartbreaking.

One proposal to help keep schools open that is periodically floated is to vaccinated school-aged children. A new survey by the Office for National Statistics suggests that 9 out of 10 parents would support doing this. At the same time though, members of SAGE and others are warning that not enough is known yet about the side-effects in children, and so the risk-benefit analysis can’t be done to allow such a move.

Moving onto the perennial issue of money – new Department for Education data confirmed that in spite of everything, there was a 20% jump in the average academy trust’s reserves, to just over £1 million, for the financial year 2019/20. And the proportion of trusts that recorded a surplus actually rose, even with the pandemic pressures, rising to 95.9% from 94%. The total surplus across the sector was a massive £3.13 billion!

It’s been relatively quiet on the comment front this week, but Rebecca Lee is looking ahead to September with “8 insider tips that every PGCE student should know”. Really useful for those starting their training this autumn – and a reminder for those already in the profession as to how much there is to take in during the early days.

Francis Green, a professor at the Institute of Education, asks who benefits from Eton’s new elite 6th form free schools. He says “it is risky… Academically-selective schools have a dampening and potentially demoralising effect on neighbouring schools. Evidence tells us that the progress of children who are not selected is harmed somewhat by the presence of academically-selective schools in the area.”

Georgia Gilholy in Conservative Home is also sceptical about the Eton/STAR project: “Those selected for these schools will be those who have already managed to achieve decent grades in less than desirable circumstances. Many are not able to do so, and therefore never fully realise their potential.”

Here’s to a restful weekend – and that football continues to come home tomorrow evening!