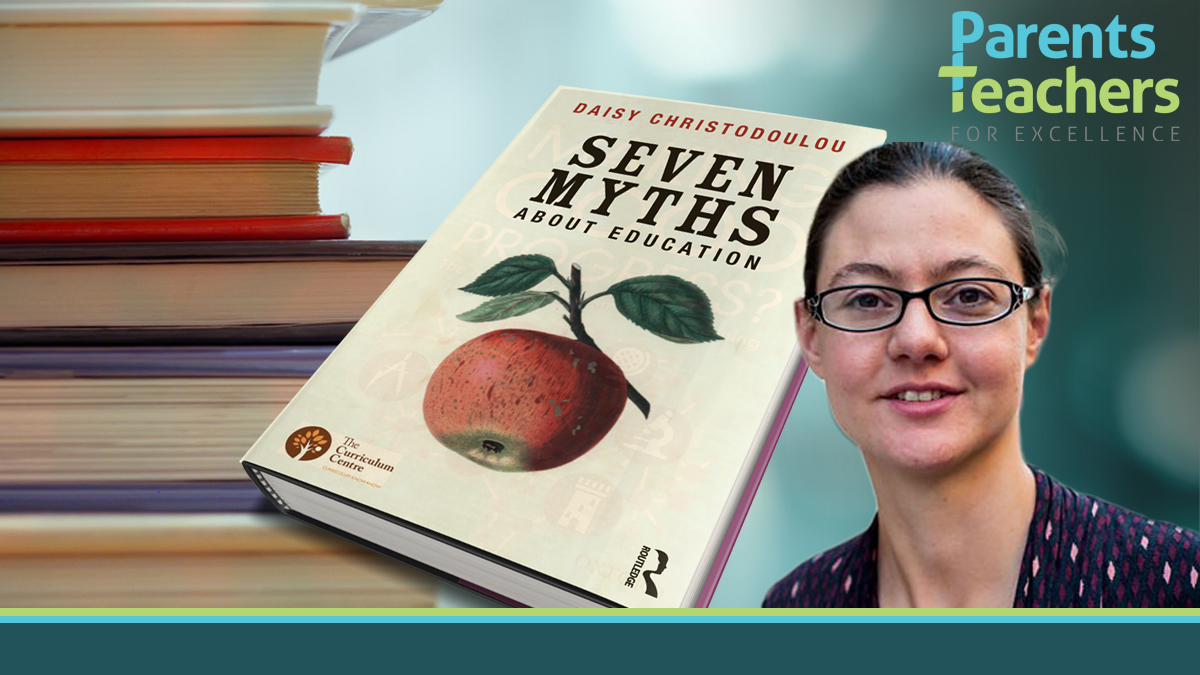 12th March 2021
By Parents and Teachers for Excellence

As we come to the end of the first week back “proper”, there can be no doubting how well it has gone overall, and how much effort has gone into achieving this. Everyone owes parents and teachers across the country a massive thanks for all they’ve done to get children back to school.

We’re pleased to share with you today the first in a series of reviews of important and influential books on education. The aim is for these to build into a useful “library”, so that a parent or teacher has a starting point if they want to know more about the key issues.

We’ve kicked off with Daisy Christodoulou’s “Seven Myths About Education” for a whole range of reasons, not least because it covers a whole bunch of topics in a very concise fashion.

When first published in 2014 it caused quite the stir. Educationalists and others alike were immediately struck that it was a game-changing text.

Dylan William said it “may be the most important book of the decade on teaching.” E.D. Hirsch called for it to“be distributed gratis to every teacher, administrator and college professor in the USA”, and Dominic Lawson described it as “a heat-seeking missile aimed at the heart of the old educational establishment.”

You can read our review HERE – and copies can be ordered on Amazon or through any good bookseller.

Unsurprisingly, much of the last few days’ news and opinion has focused on back-to-school and COVID issues.

As you might expect, there as many opinions on how things should go from here as there are people – and perhaps even more.

Michael Tidd argues in the TES for a school-specific roadmap out of lockdown, which would allow for more and more important parts of school life to return – like mixing with friends in the playground, singing, and assemblies.  Amanda Spielman told an event panel that she felt schools should not “skid across everything” in an attempt to help pupils catch up, and tough choices would have to be made as to what is, and isn’t, covered.

The shape of the school year is also up for discussion. David Carter, former National Schools Commissioner makes the case for a five term year, saying that among other benefits it gives a consistent structure to the modular curriculum delivery. He is adamant though that it would need to be followed nationally. Elsewhere Rod Grant proposes a different style model, which would mean teaching days in every month of the year.

The priority for schools in the immediate future is being thrashed about. The exams regulator Ofqual has warned that 2022 exams may need similar ‘adaptations’ as those being used this summer, because of all the disruption experienced this year by Year 10 and Year 12 students. However, it sounds as though some parents are already pressurising schools to raise the teacher-assessed grades they may give their children – showing again one of the big issues with scrapping exams. And whilst some are getting excited at the prospect of scrapping GCSEs for good, Gavin Williamson has said again today that they’re here for “an awful lot longer.”

At the same time, voices are calling for pupil wellbeing to be prioritised over academic progress, with two-thirds telling a Youth Sport Trust survey that it was more important. 250 secondary schools from across Greater Manchester will take part in a wellbeing programme which will begin this autumn and will seek to ascertain young people’s feelings and concerns as well as their levels of physical activity. The information gathered will be used to help better target resources as children try to recover from the effects of the Covid-19 pandemic.

The hardy perennial of Headteacher pay has popped up again. Following the Sunday Times research into the pay of senior staff at independent schools, David James makes the case for paying state sector heads more. Right on cue, the TES has looked into where the top paid state schools leaders are found, and what they earn – revealing that there are now seven earning more than £250,000 a year.

Jonathan Simons appeared on the Today Programme at the beginning of the week where he made the case for the importance of giving children knowledge and facts to enable them to access the curriculum and excel in school and life.

And finally, to finish on an upbeat note – there has been quite a bit of coverage of Brampton Manor’s students’ success in getting Oxbridge offers.

Thanks again to all those who played a part in getting our children back to school. Have a wonderful weekend!