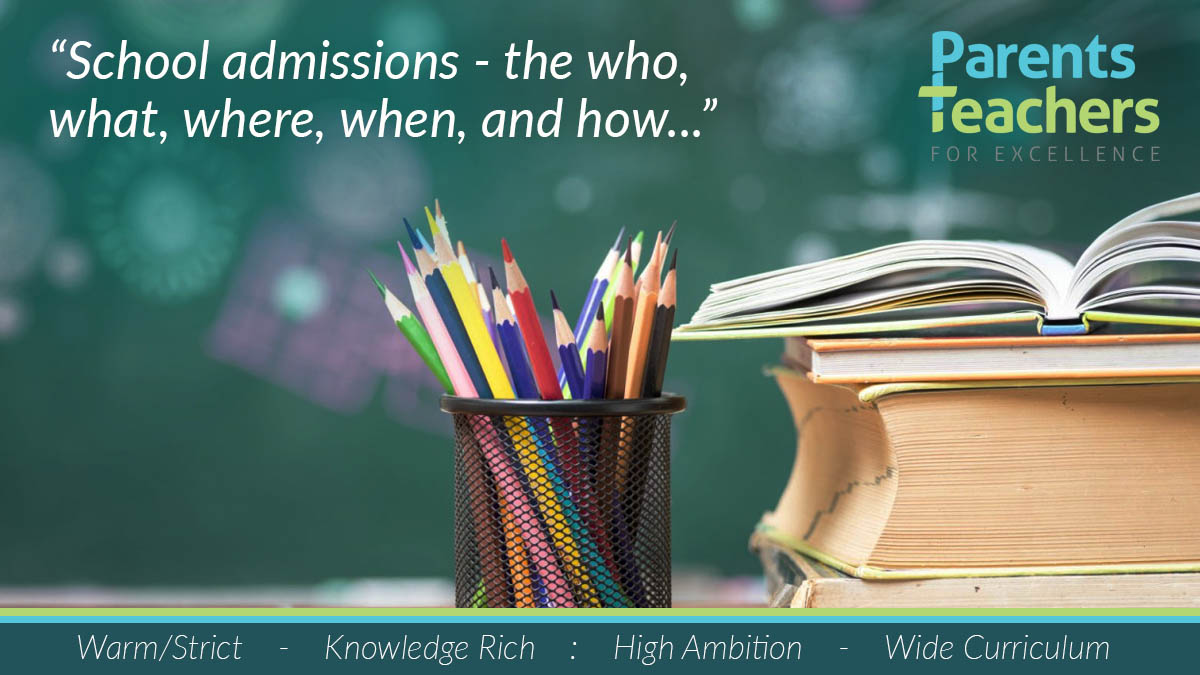 10th September 2021
By Parents and Teachers for Excellence

School admissions – the who, what, where, when, and how…

The PTE Guide to Choosing A School

If you’re a parent, there are so many things that remind you that time is flying by and your little ones are getting older and not-so-little.

Reaching the point where you need to think about which secondary school to apply for is one such moment – and it is amongst the most important choices parents can help make for, and with, their children. It can also be one of the most fraught, as every school is different, every child is different and everyone has an opinion on where is ‘best’ and where to avoid, complete with supporting anecdotes and horror stories.

The good news is that schools in England are generally better than ever, and certainly very different to how we remember them from our own days there. Funding is higher and what and how pupils are taught is taken much more seriously. In the vast majority of schools behaviour is a long way from the ‘Grange Hill’ stereotypes that the press might have you believe exist. And parents overwhelmingly get their child into a school that they have expressed a preference for. Our school system isn’t perfect, but by-and-large it serves most families really well.

However, picking a school that will suit your child is important as it can make a big difference to their lives now and into the future. As such, taking some time to consider the available options early in the process is well worth the effort, even if you have only a couple of institutions nearby or you already have a strong preference. READ MORE HERE

Whether it’s the end of your first, second or other week back, we hope that it has gone smoothly and that you’re not too exhausted.

Of course, having had underwhelming weather all summer, it was inevitable that September would see temperatures rise and the sun decide to make a reappearance. Here’s hoping it doesn’t decide to disappear again for the weekend.

Whisper it, but nature is healing: stories this week have covered Ofsted, funding levels, and Oxbridge. It’s almost like pre-pandemic times…

Before those stories though, Schools Week has a really interesting interview with the former head of the Department for Education, Jonathan Slater.

There are lots of insightful remarks in the piece – but most telling is how clear it is that he saw the DfE as being there for producers, not users – schools and teachers, not pupils and parents:

‘A key question he used to ask new civil service recruits is what teachers and students would miss if the DfE disappeared tomorrow. “Half a billion pounds would be saved. Would schools and colleges rejoice, or regret the fact there wasn’t a central organisation to disseminate best practice? The point is, we have to be the latter.” ‘

OFSTED: The latest guidance for inspectors has been released, and there are a few changes of interest. First of all, inspectors have been told to explicitly state in their reports when evidence of off-rolling is found after schools falsely denied it had taken place.

Previously, inspectors were simply told to “address” evidence of off-rolling in reports and so documents did not always use the phrase “off-rolling”, even when the practice was identified. The new guidance says standard wording would now be used “for any inspection that finds off-rolling”.

Another change means that Ofsted will no longer notify local authorities of provisional inadequate judgements of their maintained schools and academies. Traditionally Ofsted provides early notification of provisional inadequate judgements – which are pending moderation – to the DfE maintained schools and academies.

The move is backed by committee chairman Robert Halfon, Labour shadow education minister Emma Hardy and leading Liberal Democrat and the party’s former education spokesperson Layla Moran. It is however unlikely to become law because of a lack of parliamentary time.

COVID CATCH-UP: TES says that the government has no plans to replace Sir Kevan Collins as education recovery commissioner. Instead, the Department for Education (DfE) has said it will engage with the sector on its catch-up package on an ongoing basis.

The admission from the DfE comes as heads’ and teachers’ leaders express fears that catch-up is in danger of being “relegated” by the government in the upcoming spending review.

PUBLIC FINANCES: The Department for Education has been asked to find savings of “at least” 5 per cent as part of the spending review, leaving it facing cuts that could amount to £4.5 billion and prompting fears of an impact on school budgets.

Ministers have announced plans to increase funding for health and social care in the wake of the pandemic by raising national insurance contributions, but are looking to find savings elsewhere.

Given the impact of Covid-19, the Treasury said spending plans would be “underpinned by a focus on ensuring every pound of taxpayer funding is well-spent, so that we can continue to deliver the highest-quality services to the public at the best value”.

A survey of school leaders by the National Association of Head Teachers has found that nearly a third of headteachers said they were forced to slash their budgets last year.

Nearly all the school leaders polled (97%) said that funding for SEND pupils was insufficient, and 95% said funding was also insufficient for those on Education, Health and Care Plans with greater needs. Four-fifths said they had been forced to buy extra services, including speech and language therapy, educational psychologists and mental health support, which prior to austerity would have been provided by local councils, often more cost-effectively.

OXBRIDGE: Dame Mary Beard has called for people to stop being “fixated”with Oxford and Cambridge, as she urged people to look beyond the two elite universities.

The Cambridge professor and TV presenter also spoke out against a “snobbish” attitude towards academic subjects. She told The Times’ Education Commission there had been a “revolution in gender” at universities, with most of her peers as a student being middle-class white men and a rise in the number of women at Cambridge during her time there.

But Dame Mary said Cambridge and similar universities “feel very southeastern” and “white”: “While I’m no defender of grammar schools, when I think back to my own undergraduate career, there were more northern working-class blokes around my faculty than there appear to be”.

COVID-LINKED ABSENCE: Nicola Tarmey explores from a legal perspective what Heads can do if a parent refuses to send their child to school due to covid concerns.

PRIVATE SCHOOLS AND REFUGEES: David James writes about the role that private schools can play in welcoming Afghan refugees.

“Independent schools, and in particular boarding schools, are ideally positioned to help. They have the facilities and resources to offer specialist pastoral care, as well as (crucially) accommodation and a stability of education that might not be available elsewhere. Not only that, but the sector has the capacity to accept more children.

Independent day schools remain popular, with many over-subscribed, but the pandemic has had an impact on boarding school numbers. The most recent Independent Schools’ Council census showed that boarding schools have lost nearly 9,000 students since the pandemic began. Those empty beds should be made available to students, particularly girls, fleeing Taliban persecution.”

TIMES EDUCATION COMMISSION: If you want to read a piece straight from the #21stCenturySkillz genre, then the Times has an absolute classic this week, containing quotes like this from the John Lewis Partnership’s Dame Sharon White:

“Education should in her view be much broader and move from “rote learning and memorisation” to “skills like project management, assessing children on teamwork and the ability to make a product”. That might, she says, be better done through more continuous assessment than exams. “It’s very rare that there are any work tasks where you have two and a quarter hours to get from A to B. The way in which assessments are done [should be] mirroring the world of work.”

Pupils are also in her view forced to specialise too early, with many choosing between sciences and humanities after GCSEs. “I wouldn’t have a separate step at 16. I would look at a high school diploma which is sufficiently broad for those who are going down a more or less academic route.”

That’s all for now – have a brilliant weekend!