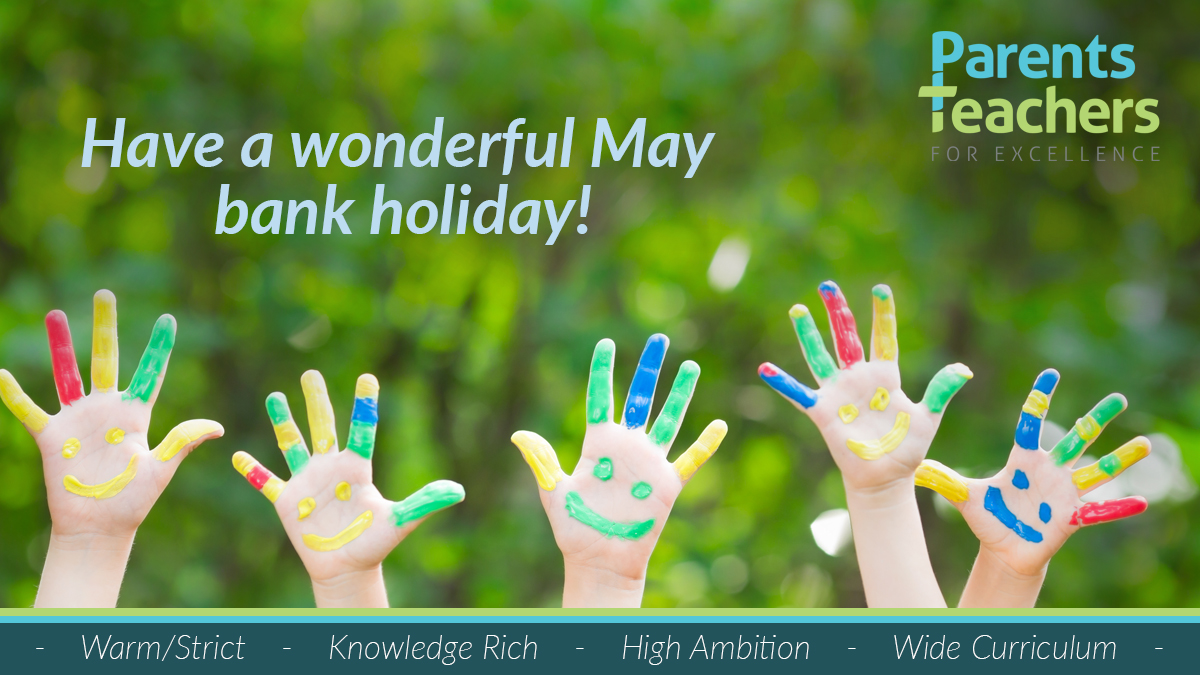 30th April 2021
By Parents and Teachers for Excellence

That’s another week nearly done by everyone. It’s clear that there’s no let up in the pace of things for everyone in schools, and so this weekend’s Bank Holiday will be received with particular joy.

Today we start with some good news: school attendance seems to be on the up, and at primary level is around what it was before the pandemic struck. Given everything that that children and their families have been through it’s a huge achievement, and testimony to the hard work and effort put in by schools everywhere.

Nationally, the Education Secretary committed some news when he gave a speech to the Confederation of School Trust’s conference. There were three major newsworthy things Gavin Williamson mentioned.

First of all, he reiterated the government’s desire to see every school in a multi-academy trust. A “model” service-level agreement for academies to support maintained schools was published by the DfE, and the Education Secretary encouraged this to be used more – to allow schools to “try before you buy” the advantages of academy status. A number of other policies to support academisation were also announced. Schools Week has a handy summary of them here, and the TES has something similar here.

Williamson has also waded into the debate around behaviour in schools, and announced there will be a termly survey of all schools in England. He said this would demonstrate whether behaviour was getting better or worse over time, “signpost” what schools needed and show what interventions make a difference. It was stressed that it would not provide school-level data or be used as a school performance measure.

The Education Secretary also returned to the issue of mobile phones in schools, and again said he wanted to see more schools ban them for pupils on site. Nick Gibb followed this up, telling the Commons Education Select Committee there was evidence that schools that banned mobiles had higher test scores. Freddie Whittaker has looked into this, and thinks that the evidence is less compelling than suggested by Gibb.

Naturally, some think that all these announcements are a distraction, deliberate or otherwise, from more important issues. Certainly this is what Geoff Barton of ASCL thinks. And a Headteacher has written anonymously in the TES about funding pressures at their school.

The question of Pupil Premium cash for schools has risen this week too, following some extensive investigation by campaigner Andy Jolley. The DfE has brought forward the date when they counted which pupils were eligible for Pupil Premium funding, and because lots more became eligible in recent times due to the pandemic the change has meant they now won’t be counted until next year. Some charities are adamant the policy must be reversed, and now unions have joined in too. However Nick Gibb is equally adamant that schools won’t lose out.

Elsewhere, a headteacher has sparked “outrage” after banning teachers from using phrases including, “boys and girls”. Anderton Park Primary has stopped teachers from using terms including, ‘let’s go, guys’, ‘man up’, ‘grow a pair’ and ‘boys and girls’. Students as young as three are taught to hold up posters flagging ‘sexist’ terms and the two pupils who find the best examples are rewarded with certificates at the end of the week.

Finally – a good news story to come out of the pandemic pressures.

New research from Renaissance Learning suggests that children read longer books of greater difficulty during lockdown periods last year, and reported that reading made them feel better while isolated from the wider world. They found that while the number of books read overall dropped 17% in the year to July 2020, compared with the previous year, children read more during lockdowns and school closures. Their data also showed that the books read during lockdowns were more challenging, with primary school children and those in Year Seven reading more demanding texts in particular.

And on that note – have a great weekend, and enjoying reading lots!