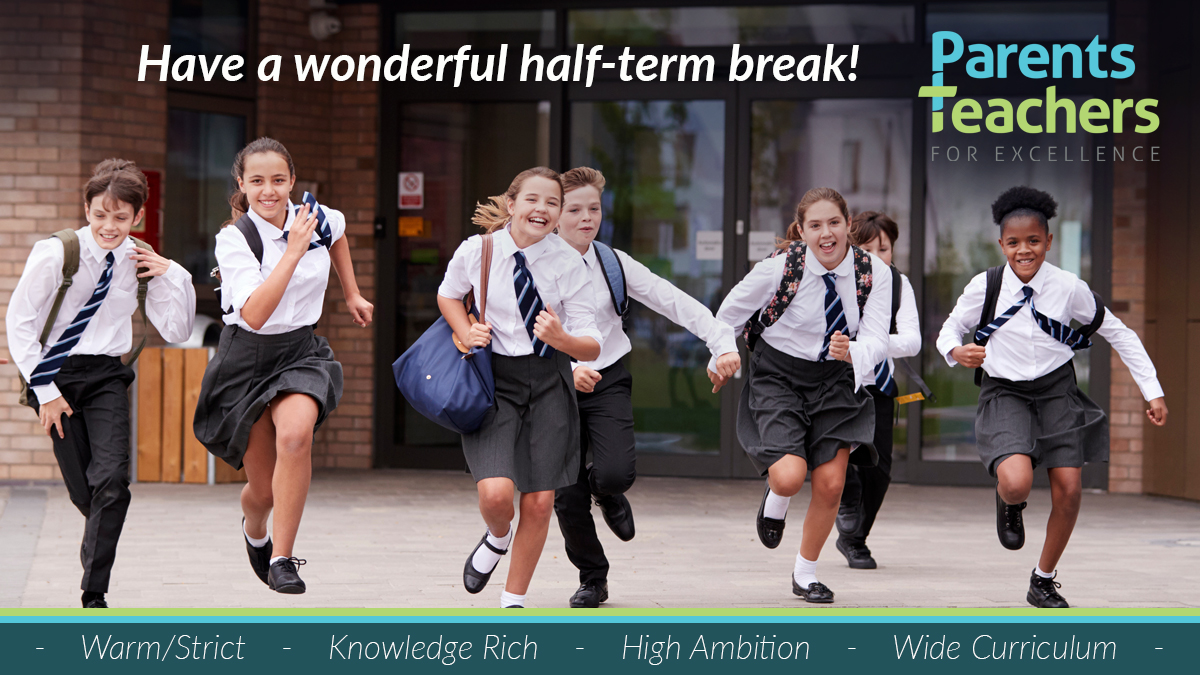 28th May 2021
By Parents and Teachers for Excellence

The time since Easter has been pretty hard going for everyone, especially school staff. Whether it’s preparing for teacher-assessed grades or primary-secondary transition, mass COVID testing or dealing with pupil worries – it’s genuinely been an unprecedented time.

The tone of stories and comment pieces about schools has shifted recently, from concern about the now to confidence about the future. This says much about how well parents, teachers, and others have done to keep the show on the road.

With the Bank Holiday weekend and half term break now upon us, hopefully everyone will at least get some time for rest with their nearest and dearest – and with some sunshine too. Heaven knows it is much needed and well-deserved.

We’ll be taking some time out at PTE too, but will be back soon with some ideas to add to the discussion about what parents and teachers can do to support schools to get even better.

Have a great week.

Education Secretary Gavin Williamson has said that many students would be “better off” if they did not go to university and school-leavers would have “more rewarding careers” if they ditched degrees and took up further or technical education instead. Speaking to the Telegraph, he said that the outcomes “speak for themselves”, pointing to figures which show that five years after completing a higher technical apprenticeship, the average person’s salary outstrips that of the average graduate’s.

A teacher who was suspended after showing children a caricature of the Prophet Muhammad can return to the classroom after an independent investigation found they did not intend to cause offence by showing the image. Protests were held outside Batley Grammar School after the teacher showed the image during a religious studies lesson in March. The school has said it will offer more guidance and training for staff.

It has been confirmed that Amanda Spielman has had her term as Her Majesty’s Chief Inspector extended by two years. She will now stay in post until the end of 2023.

Data from the DfE shows that the autumn term saw 60 per cent of pupils in England miss some lessons because of Covid. Pupils missed 33 million days of in-person education due to COVID, and 55 million days in total. The absence rate, normally around 4 or 5 percent in the autumn term, was just under 12% this year.

Ofsted has published another of its subject-focused research reviews, this time for maths. It makes for interesting reading. There is recognition that there is no“singular way of achieving high-quality education in the subject” – but it does identify common features of successful approaches. Schools Week has a good summary of the key points.

With discussion apparently taking place in Whitehall about a longer school day forming part of the COVID recovery plans, Amanda Wilson asks where the evidence is that it would work. She worries that extending the day by half an hour – as per the rumours – could perhaps be what tips some teachers and school leaders over the edge of a very rocky cliff.

The government has finally published findings about the state of repair of schools from its condition data collection. It concluded that the modelled cost of “remedial work to repair or replace defective elements in the school estate” is £11.4 billion, with the average secondary school needing £1.6 million worth of work. That’s a lot of repairs, and an awful lot of money.

The Guardian says that the accumulated bill is so big due to the decision by Michael Gove to axe an ambitious programme of rebuilding.

Kester Brewing makes the case for joy being an essential part of education, and something worth fighting more for. He argues that it has been a tough time for all in education but that  this doesn’t mean it should become a miserable slog to exam outcomes.

There’s a really interesting piece by Sammy Wright – a teacher and member of the Social Mobility Commission (SMC), about the progress gap for pupils. It’s about research carried out for the SMC, and he says that the data from this is clear: the progress gap won’t close in the current system, using our current tools. However, he thinks that there are reforms that could build a better picture and a better system

And what better way to round up the half term than a collection of TikTok teacher impressions thanks to the TES.

Enjoy – and have a great half term!