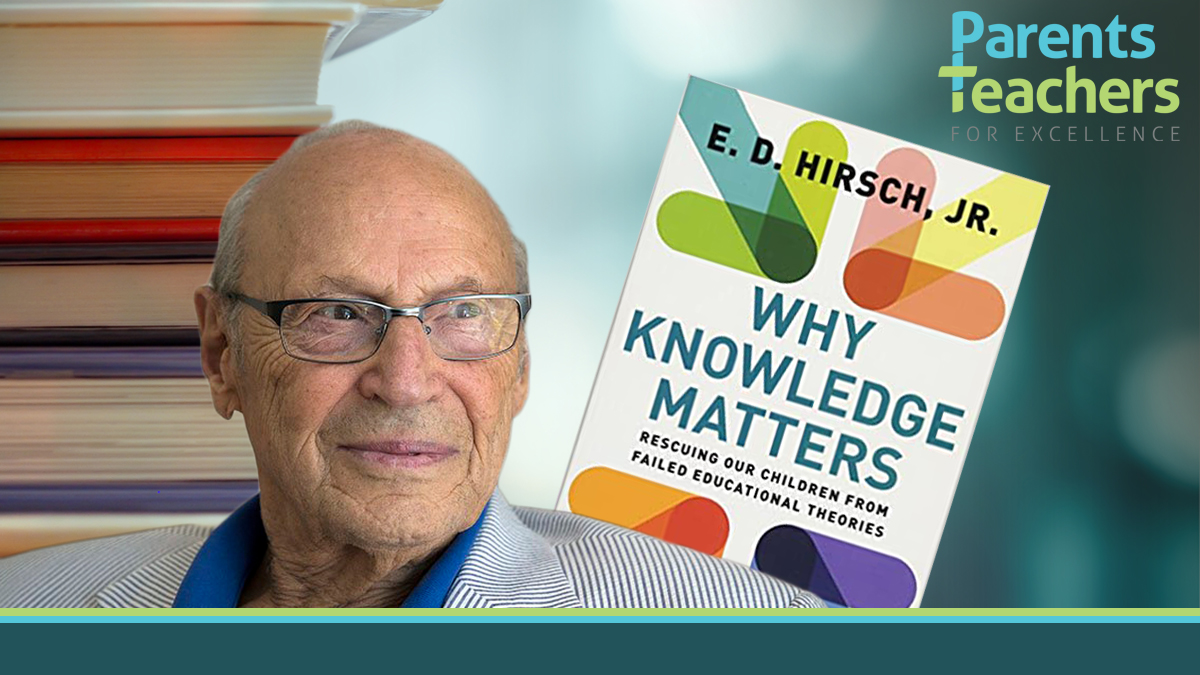 19th March 2021
By Parents and Teachers for Excellence

It’s been another busy week for everyone involved with schools. We hope it has gone smoothly for you wherever you are.

It’s Friday once more, so time for another review of important and influential books. We want these to build into a useful “library”, so that a parent or teacher can go straight for the best that’s been thought and said on education over the years.

This week’s review is of E.D. Hirsch’s “Why Knowledge Matters”.

Whilst “Cultural Literacy” was the work that put Don Hirsch and his thinking on the map in the 1980s, 2016’s “Why Knowledge Matters” is arguably his opus magnum.

It  revisits and updates his ideas and arguments for the current day, giving them greater clarity and depth in light of developments in neuroscience, as well as reforms and initiatives in various jurisdictions over the past few decades.

It starts with a compelling prologue, which examines what he calls “The Tyranny of Three Ideas.” These ideas relate to the purpose and process of education, namely that it is part of a natural development process and should be tailored to a child’s age & inclination; should be individualised in line with interests and learning styles; and aims to develop general skills like critical thinking or creativity.

Hirsch is clear about the problem with these – and goes on to explain why they hold teachers and children back and propose better alternatives. Read more HERE.

A National Audit Office report into how children were supported during the early stages of the pandemic has highlighted several flaws in the Department for Education’s response. It has been told to take “swift action” to review its response to the covid-19 pandemic to ensure poorer pupils don’t miss out again.

Children returning to school has not led to a rise in Covid infections, as the first data shows just 0.05 per cent of secondary students tested positive. A detailed analysis by Prof Jon Deeks, an expert in biostatistics at Birmingham University, has found that the number of positive cases among pupils are far lower than ministers expected: of the 2,762,775 lateral flow tests that were carried out on secondary pupils, just 1,324 were positive, according to the first official figures.

In Wales, the devolved government has said that all pupils are to be taught about racism and the contributions of black, Asian and minority ethnic communities. Prof Charlotte Williams, who led a working group created by the Welsh government to look at the teaching of BAME contributions through history, said there was considerable evidence of racial inequality in Wales’s education system.

In Westminster, unions have come under fire for operating a “monopoly” on teachers’ rights as MPs call for a change in the law to allow them non-political support. There must be a “level playing field” for teachers who are not members of trade unions, according to Brendan Clarke-Smith, the Tory MP who introduced a private members bill on the issue on Wednesday. The bill has the backing of ministers including the Education Secretary, and states that teachers should have the “right to accompaniment” by someone other than a trade union if they are hauled before a disciplinary hearing.

There was a superb article by Amy Forrester about the exclusions debate,which has flared up once again following comments by the DfE’s Mental Health “tsar” Dr Alex George. As Amy puts it: “One of the most frustrating aspects of the debate is the well-meaning but misguided education commentators – who don’t teach in schools and don’t work in them – throwing their two penn’th in, as if their opinion holds some weight. If you have no skin in the game, if you’re not currently at the chalkface, you’re unlikely to truly understand the issue at hand.“

Discussions about accountability and exams for the short-term continue. Ofsted will conduct “full” on-site inspections at about 25 schools over the next fortnightto assess whether its framework needs to be tweaked ahead of a return to graded inspections in September. Amanda Spielman told the Association of School and College Leaders’ conference that Ofsted will not be returning to its normal inspection programme until the next academic year, and that it was still in discussion with the government and education unions about what it will be doing next term.

And in terms of 2021 exams, there has been some concern raised by teachers about the proposal to allow pupils to see test materials in advance – with some calling it a “car crash”. Ofqual has reiterated that the evidence for exam grades this summer is not a ‘topic for negotiation’ between teachers and students. The Ofqual Chair, Ian Bauckham, has warned that grade inflation will happen this year, but that it will be unsustainable in the future. At the same time, Ofqual’s CEO Simon Lebus said he didn’t think there would be huge inflation this year. We’ll find out in the summer how it pans out.

Finally, a fascinating piece in the Telegraph reveals that the Schools Minister Nick Gibb was amongst others recruited to smuggle money, medicines, letters, documents and other things in and out of soviet Russia during the Cold War. Gibb was a young graduate of 21 in 1982 when he was sent to Leningrad, now St Petersburg, to deliver up to 100 letters, which were strapped to the inside of his legs under ‘horrible baggy black cord trousers’ and tucked into his boots in order to evade Soviet customs. It’s quite the story!

Have a great weekend.