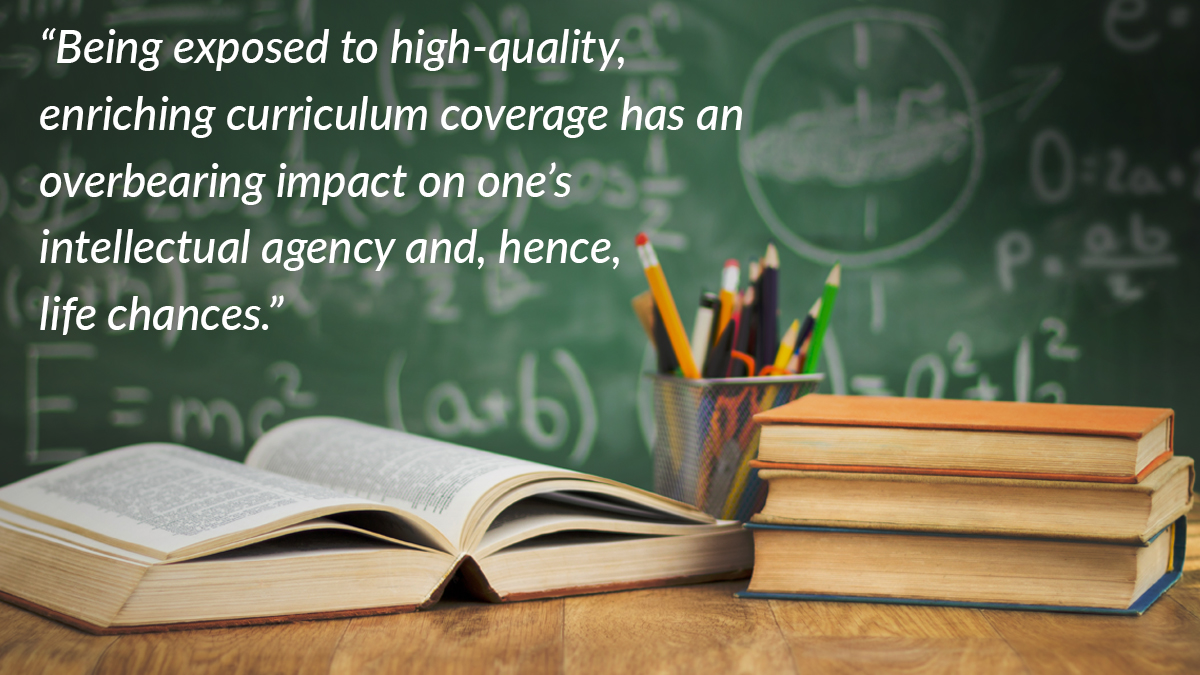 Powerful knowledge is the key to intellectual maturity

The grit in the oyster makes the pearl

In 2005 the former MP and TV personality, Robert Kilroy-Silk, founded the Veritas Party, following the founder’s split from the UK Independence Party that same year. During the small political rumblings that this news story created, I was alerted to the fact that ‘veritas’ was Latin for ‘truth’. Thirteen years later I was attending a CPD course on vocabulary; towards the end of the session, the presenter asked the assembled teachers what the word ‘verisimilitude’ meant, which I had never before come across. Reminded of Kilroy-Silk’s ill-fated political foray, I made the leap and shot my hand up in an instant. “Is it to do with truthfulness?” I enquired. I was almost right – the word means ‘the appearance of truth’… but I was certainly teacher’s pet in that moment! Fast forward to last month and on page 38 of Kingsley Amis’s The Green Man I read the word ‘verisimilitude’ for the first time in print in my entire life. I afforded myself a little grin of pride in knowing what it meant!

The series of minor happenings that led me to understand Amis’s prose without missing a beat is, in its essence, at the heart of powerful knowledge; a toolkit of facts that enlightens and uncovers. Utilising abstract knowledge that has been collected ‘on the way’ provides moments of discovery when you least expect it. Albeit trivial, my example illustrates how being exposed to meaningful knowledge reaps dividends of genuine worth. An accumulation of knowledge nurturing my intellectual maturity. By 2018, Ofsted were firmly on-board with the ‘knowledge revolution’, covering ‘powerful knowledge’ when training their inspectors; then essentially adding it to their handbook in 2019 with a heightened priority given to knowledge and its retention in long-term memory.

The skills-led orthodoxy, while remaining predominant, has had to make room for knowledge as a guiding force, in particular, powerful knowledge. Reconciling the word powerful with the word knowledge may weigh heavily on the uninitiated, but the overarching principles provide the platform to foster accomplished learners from the formative years onwards. Indeed, an individual’s intellectual maturity is set to the beat and rhythm of a life’s experiences and teachings; setting the pace and tone of what that person will know and understand at any given age. Without revisiting well-publicised socio-economic influences on a child’s educational journey, there is little doubt that being exposed to high-quality, enriching curriculum coverage has an overbearing impact on one’s intellectual agency and, hence, life chances.

Powerful knowledge is the ability to apply ‘high-octane’ rich knowledge when exposed to new and challenging academic territory. A self-sufficiency to overcome academic obstacles is the ultimate promised land and demonstrates a child’s arrival at age-related mastery. Be it in the arts or science, children can be set on a pathway that galvanises their intellectual awakening; being able to make connections that they never knew were there.

Possessing powerful knowledge allows an individual to showcase their ability to critically assess an area of study by linking a variety of key learning points to one another and reaching an informed conclusion that demonstrates critical thinking and a reservoir of important knowledge. Such knowledge may be esoteric at the outset but piecing together the key parts allows an individual to recall older learning and then use it at any given moment as ideas begin to coalesce and make sense.

In a school setting, children begin their own academic enlightenment in Early Years and Foundation Stage (EYFS) where a range of formative learning points are given prominence to provide the young student the toolkit to survive and develop. But it is no surprise that, according to a Sutton Trust study, communication and language remains a problematic element of EYFS teaching. Communication and language is the foundation on which all learning is built; crack this vital area of early study and you unleash a young learner onto the rest of their learning journeys. Grasping key knowledge-based concepts around literacy, phonics and numbers, delivered by well-qualified and accomplished practitioners, gives children what they need to grow as they begin to make increasingly sophisticated connections, drawing critical conclusions and assessments about things that matter.

Let us look at an example. A primary school child learns the bible story of Moses taken from the Book of Exodus. From a young age, an individual begins to piece together a picture of the motivations and historical backstory of antisemitism through a series of significant learning points. Years later the same individual is reading Philip Roth’s perspective of 20th Century Jewry in Plot Against America and is able to put into context the Old Testament’s message of a world of exile and suffering, unwelcoming to Jews. These connections then burnish the individual’s capacity to frame such events as the Holocaust in an historical and sensitive setting that goes beyond the study of Nazis. Indeed, well-designed curricula create threads that pull through what has been previously taught and learned – building on what has gone before in good faith, yielding intellectual growth over time.

This is powerful knowledge writ large. It is why what you teach and what you study matters because it leads to something else that is even better.

Let us up the ante… 19th Century fin de siècle works of literature, such as H.G. Wells’ The Time Machine (1895) or Robert Louis Stevenson’s The Strange Case of Dr Jekyll and Mr Hyde (1886), are texts that have stood the test of time and are still read today. But to get under the skin of the authors’ intent, to appreciate their incisive commentary and satire, you may have to unpick the historical contexts that motivated them.

Let us now look at an example: Bram Stoker’s chief inspiration for his 1890 Dracula novel was Prince Vlad ‘The Impaler’ Dracula, the psychotic medieval ruler of Wallachia. Indeed, a recent discovery at the London Library – where Stoker carried out his research – reveals the author’s pencilled notes in the margins of printed texts he studied as he prepared his book. By reading extensively about Romanian witchcraft and Vlad himself, Stoker was able to add his pivotal work to those turn of the century works of literature that enthralled and appalled readers of the time. These works told of a degenerate society fearing ‘otherness’, as mass industrialisation began to yield unwelcome consequences. They combined tales of scientific enlightenment with ancient superstitions; in them old Europe was dragged into modernity; the depravity they depicted threatened traditional ideas of polite restraint – fear is around every corner and Stoker et. al. exploited it marvellously.

This example demonstrates the inter-connecting factors that gives historical and artistic resonance to the text being studied. The powerful knowledge that sits behind such analysis grants the student the clarity and lucidity needed to raise the novel from being a ‘great read’ to a work of genuine artistic merit. The relationship between Central European Medieval tyranny and 19th Century gothic horror only comes to light when plotting Stoker’s own creative journey – indeed, a similar case could be made with reference to the works of Robert Louis Stevenson and H. G. Wells.

The idea that ‘skills are all you need’ is now debunked despite sticking around for a long time. As Tim Minchin declares: ‘just because ideas are tenacious doesn’t mean that they’re worthy’. Make no mistake, skills are important, but possessing key knowledge is a pre-requisite to real learning and understanding, for cognitive development to take hold. It is why educationalists are keen to point out that reading cannot be reduced to decoding skills; comprehension, real understanding, is just as vital as this is what develops the fluent and engaged reader.

Presenting academically-driven subject matter to children as they work their way through school further enhances a child’s ability to gather important knowledge; garnering their intellectual development and growth. It is at this point that the skills of critical and analytical thinking, reasoning and problem-solving bear fruit… but you cannot put the cart before the horse.

The construction of academically rigorous curricula intent on cultivating a generation of well-informed critical thinkers provides school leaders with genuine food for thought. Avoiding the easy ‘hits’ and providing subject matter designed to challenge and provoke is no mean feat. This is not supposed to be easy. Creating obstacles burnishes intellectual maturity. Having the path of most resistance as a guiding principle offers the opportunity to teach with ambition and aspiration – the tone is set and it is going to hurt. In the spirit of ‘tough love’, such an ambition is the greatest act of kindness that we can bestow on children whose lives are characterised by privation and limited opportunity.

The grit in the oyster makes the pearl.

Matthew Fitzpatrick is the Principal of Morley Newland Academy, an Outstanding-rated primary school in Leeds part of The GORSE Academies Trust