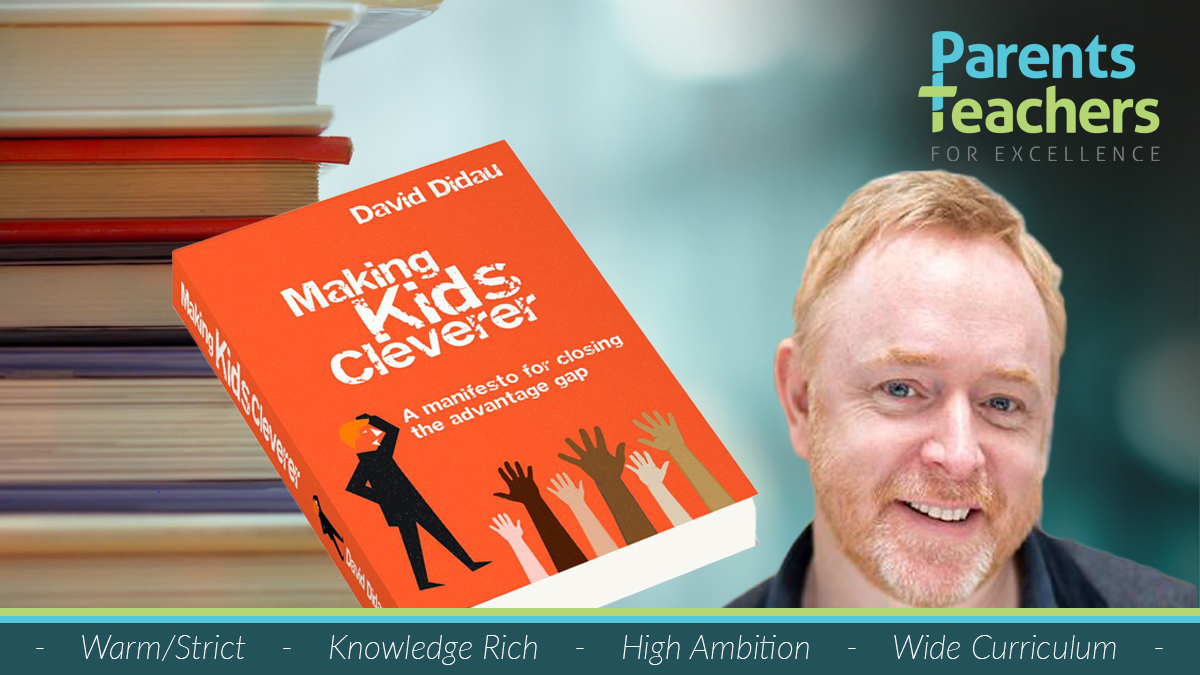 21st May 2021
By Parents and Teachers for Excellence

David Didau is an extremely charismatic and compelling teacher, trainer, and writer. In the early stages of the post-2010 school reforms in England his “The Learning Spy” blog was one of the most influential ones in terms of changing the nature of the debate had by teachers and policy makers alike.

He also wrote a number of well-received books, including “What If Everything You Knew About Education Was Wrong?” in 2014. However, 2019’s “Making Kids Cleverer” is probably the book where the most important ideas, research, and evidence are pulled together in “a manifesto for closing the advantage gap” – and what a manifesto it is!

Not enough education books manage to make their case so well or in such a systematic and informed manner, relying instead on anecdote or emotional persuasion. “Making Kids Cleverer” has plenty of the latter but these are the cherries on the cake – David lays out his thinking in a clear and logical way, alongside the necessary research evidence as it stands, so that the reader can see how it all fits together.

“The purpose of education” chapter looks at different reasons given for educating kids and concludes that:

“…whatever you believe, all endeavours are strengthened when imbued with a sense of purpose… I will build the case that if we focus education on making kids cleverer, all else is likely to follow.”

So whether it’s about making children nicer, or intergenerational transmission of ideas, or preparing them for the 21st century workplace – he argue that making kids smarter is probably the best way to achieve it.

Building on this, he then explores the role and impact of culture, definitions of intelligence, nature and nurture, and of course cognitive science and our understanding of how memory works. Lots of relevant literature and research is referenced for those wishing to delve even deeper into things. Helpfully though, there is also a very handy “key points” summary table at the end of each chapter for those of us who need such things to absorb stuff!

He concludes that the best thing that we can actually do to narrow the advantage gap  – as opposed to stuff we can only do in theory – is shift the bell curve of cleverness for children:

“If we expend our efforts on trying to make everyone the same we shall surely fail. There will always be a difference between the most and least intelligent, and the most intelligent are always likely to be the most advantaged… if our energies are directed towards trying to improve everyone’s average, all children will improve. We cannot all be geniuses, but we can all get cleverer.”

Not every reader will agree with his conclusion, but they will definitely benefit from having read his book and thought about the issues and evidence presented. And for this reason, we think it’s worth adding to our library of the best books on schools and learning.