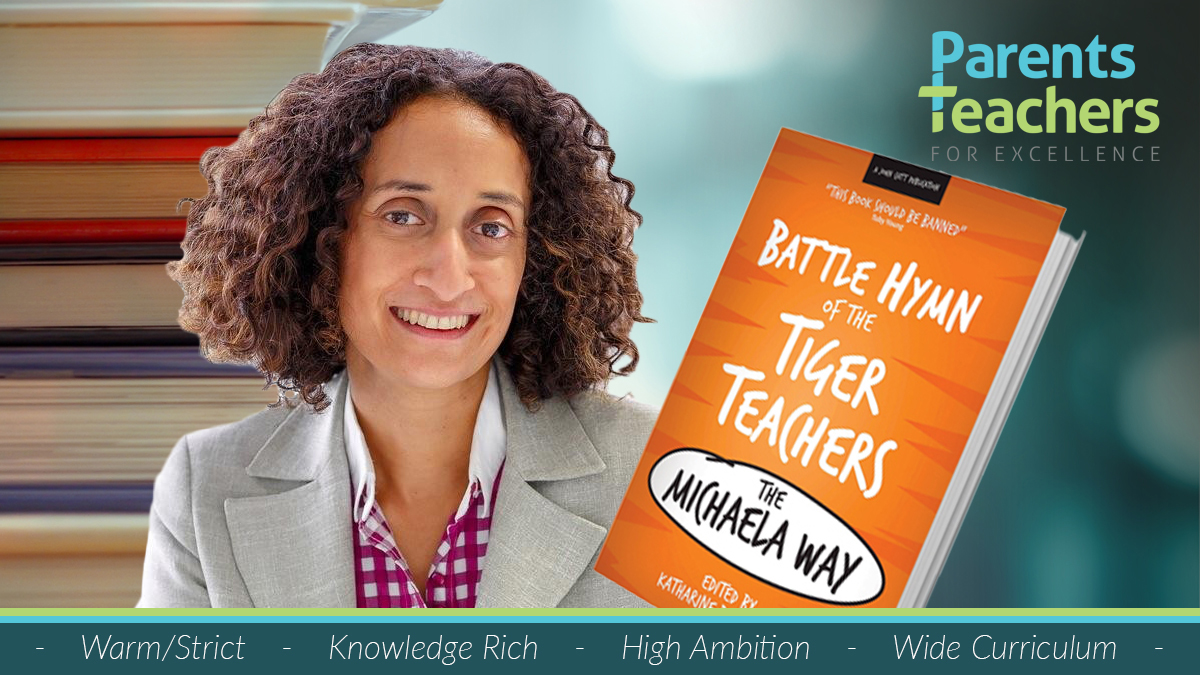 11th May 2021
By Parents and Teachers for Excellence

Right from the beginning, so much about Michaela Community School (MCS) and its founder Katharine Birbalsingh has been marked as “controversial”.

Most of the time the description has been unfair and unnecessary – there is little at MCS that isn’t done by lots of other schools around the country, yet those places don’t attract the same kind of criticism.

That said, in the early days MCS did deliberately court attention, particularly in the bold and unapologetic way that it promoted its underlying philosophy and approaches. Through tweeting and blogging its teachers gained a reputation as an assertive, thought-provoking bunch. They definitely helped to turn the dial on a range of practices in schools, and their first book – “Battle Hymn of the Tiger Teachers – The Michaela Way” – played a big part in this when it came out in late 2016.

The school was in only its third year of operation, and for an institution yet to face an Ofsted inspection or set of exam results bold claims were made throughout the book – from the introduction by Katharine Birbalsingh (“Free at last”) onwards.

Each chapter addressed a core Michaela belief – e.g. “Drill and Didactic Teaching Works Best”, “Marking Is Futile”, “How Reluctant Readers Learn to Love Reading”, “Competition is Crucial” – and a member of the team took the reader through the evidence and thinking behind the belief. It was clearly spelled out to the reader how things were done in the classroom; there were lots and lots of examples of what implementation looked like.

A few years on, one might wonder what the fuss was about, but that would be to forget how much has changed across schools in the interim – and this book played an important part in spurring on the many discussions that caused these changes to happen.

Not many schools had scrapped marking in 2016 – now lots have done so, and made the shift to whole-class feedback.

“Family lunch” was a somewhat eccentric concept, practised by a few schools lucky enough to have sufficient dining space to make it happen – today more and more are trying to make it happen, because of its numerous benefits.

And of course, we’re all much more mindful these days of the importance of cognitive science and memorisation when it comes to curriculum sequencing and lesson planning.

BHOTTT came out at a key moment and showed how the extraordinary was really quite ordinary, and could be made more ordinary still if practitioners put in the time and effort.

Indeed, this was often the biggest grumble that its critics had – that what MCS was doing wasn’t new or unique. And to some extent the critics were right, in that MCS was largely adopting effective ideas that were already being used elsewhere. But this actually just made MCS’s case for them: anyone could pull these things off, if they were clear about what they wanted to do, and fanatical about the implementation.Of course, in 2021 we have the benefit of MCS having achieved further significant external validation for their approach, having smashed an Ofsted and gained a quite incredible first set of GCSE results. Re-reading “Battle Hymn of the Tiger Teachers”  today one can believe how it was done –  and any parent or teacher who wants to understand the kinds of things that can make any school great would get lots out of time spent on this book.