A plea for politeness

Back in March I wrote on this site about school shaming, and sadly it is a topic that I feel the need to return to again now.

I was recently interviewed by Donna Ferguson for a piece in The Guardian on the topic. The article sparked a lot of discussion online – not surprising given the emotiveness of the issue, and the frequency with which schools & their members are called out.

We are used to stories at the start of an academic year initiated by unhappy parents and their children going to a newspaper. Insisting that students follow the rules of the school they attend is deemed clickworthy –whether it is about uniform, haircuts, piercings, lateness, personal conduct, homework or whatever.

(That the media organisations covering these situations have rules of their own that they insist employees or visitors follow is handily overlooked.)

It feels though that the number of stories based on the word of a disgruntled parent or pupil is increasing, and they are becoming a year-round phenomenon. It’s hard to tell if this is actually the case – it could be the same frequency but easier to share these days, thanks to social media. However, I am certain that the intensity of the accompanying frenzy has grown.

A recent example that I have looked into saw a one-sided and incorrect telling to a local paper generate:

While a few might claim that a school cannot be shamed, I know from discussions with many of those at the centre of this storm how wrong such a statement is. The human misery created by all those piling in was immeasurable. The amount of time sucked up dealing with it by governors and staff must have run into the hundreds of hours.

Having chatted at length to people on the receiving end of this and other recent shamings, it is clear that there were two aspects that were especially frustrating to them:

There is little we can do to change the first of these. There will always be people who threaten public humiliation to get their way with a school or have revenge on people, and some will actually go through with this. Schools cannot breach confidentiality, so have one hand tied behind their back when responding to press queries.

However, I believe that there is something practical that we can do about the second point.

I’m of the opinion that while we’re all fallen creatures, the vast majority of people are good and don’t intend to upset others deliberately.

I think that often people pile in on these things without giving it much thought – it’s just so easy to share, retweet, and so on. Therefore I propose that when we spot something that could lead to a shaming we politely ask some simple questions of the person concerned: 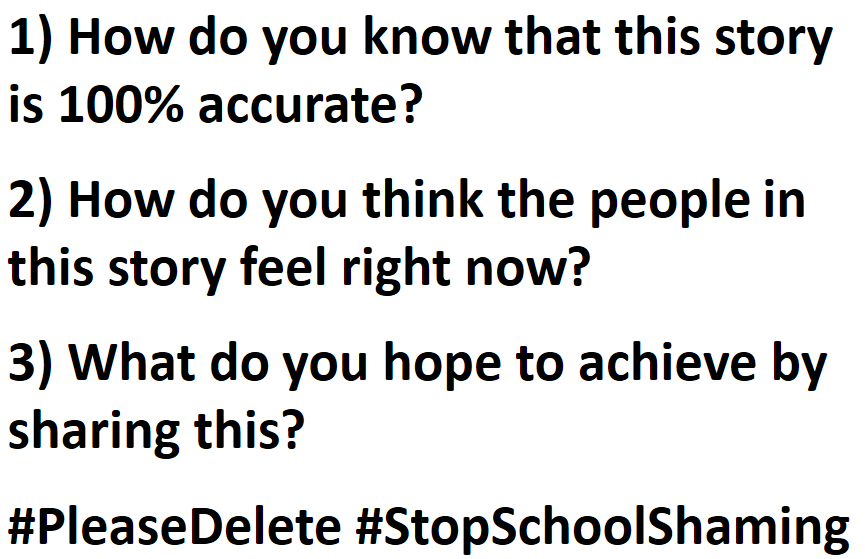 I think that it is important that we all remember that it is absolutely a person’s right to say what they like – within the bounds of the law. Some will choose to leave up the offending posts/tweets etc – and in the end we have to accept and respect this, even if we strongly disagree with what they are doing.

Hopefully though we can nudge the tone of debate away from attacks on individual organisations and individuals, and towards a politer debate around ideas and opinions.

Education is too important to not debate or celebrate – and we can do it in a way that enriches everyone’s understanding, without denigrating or embarrassing people. Let’s see what we can do together!

(And if you want to register with us to stay in touch as we challenge school shaming, you can do so here: http://www.parentsandteachers.org.uk/join-us )