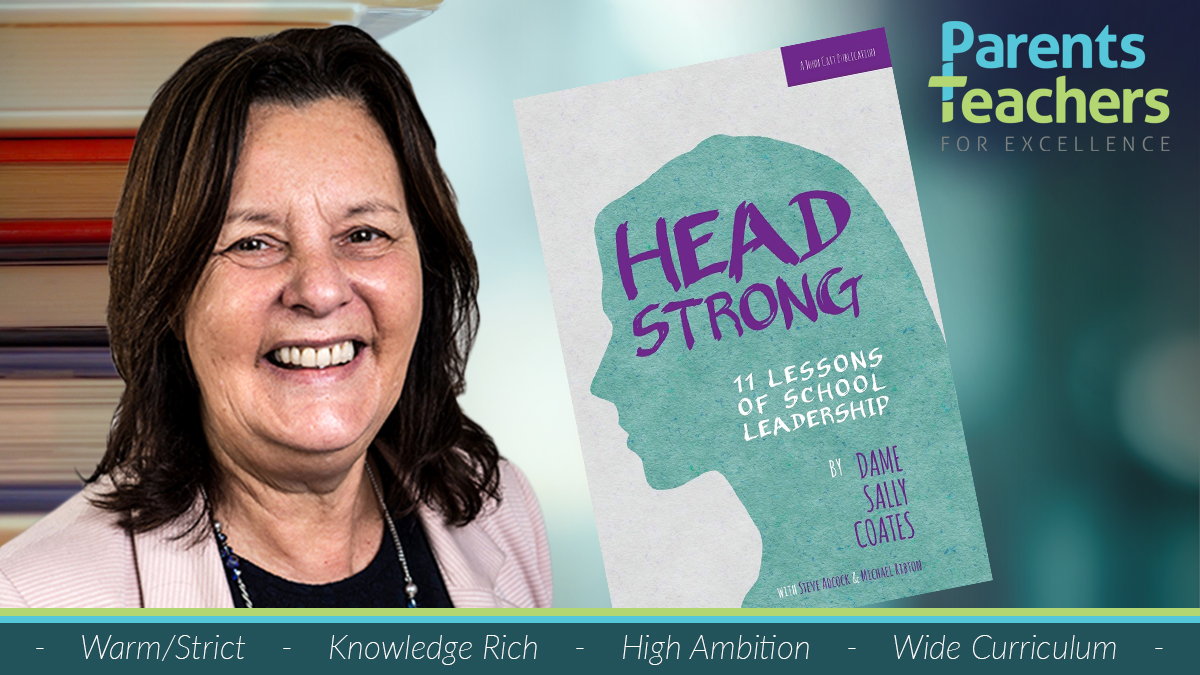 27th April 2021
By Parents and Teachers for Excellence

While it was first published in 2015, when Dame Sally Coates had moved to a senior role in United Learning Trust, “Headstrong – 11 Lessons of School Leadership” was largely written whilst she was Principal of Burlington Danes Academy (‘BDA’).

Dame Sally took over the school in 2008 when it  was struggling in a whole manner of ways: high staff turnover, low outcomes for kids, surplus places, and poor attendance and behaviour. Headstrong is about how Dame Sally turned BDA into a popular and high-performing place – and the lessons learned from this and her previous experience.

Since publication, the book has become a regular on reading lists for those interested in school improvement and leadership. There are a number of good reasons for this.

First of all, it’s written to be used by people on the front line. Topped and tailed by a brief introduction and conclusion, it has a chapter focused on each of the eleven lessons offered up (e.g. “Lesson 1: Lead from the Front”; “Lesson 7: Create Clear Systems and Structures”) This gives a clarity to proceedings and allows for dipping in-and-out as needed.

Secondly, it’s written in an incredibly engaging style: Dame Sally’s humility and experience comes through on every page. It’s rich with anecdotes and evidence from BDA, education, and elsewhere. Not many education books mention as diverse a range of characters as this one, with Nietzsche, JFK, Sir Michael Wilshaw, Peter Hyman, and Malcolm Gladwell featuring amongst the mix. It all makes for a thought-provoking read.

Within the prose are really useful resources for others to steal for their own context: examples of checklists, policies, statements, and so on, as well as asides about the wider system and other relevant factors. It is designed so the reader can see how BDA did things and adopt or adapt them for their own place.

Importantly, while the author is clear about what she sees as important principles, she isn’t overly prescriptive about how schools implement them. She is adamant that context is key – in terms of where on the improvement journey a school is, and also its particular characteristics. For instance, she has this to say about silent corridors:

“I’m… intrigued by schools where students march in line, sometimes even reading books in silence – a model borrowed from a chain of charter schools in America… but our long corridors, large student body and sprawling site aren’t conducive to silent transitions, so we settle for an insistence on calm, quick transition, supervised by SLT and teachers, who we ask to meet and greet their students on the corridor outside their room.”

It’s the principles around being a Principal that Dame Sally is after – not specific practices – and this means her lessons are focused enough to be useful, but not so tight as to be restrictive.

Since writing the book, as well as being put in charge of all the secondary schools in England’s biggest academy trust, Dame Sally has conducted reviews on prison education, plus the national teaching standards. Reading Headstrong now, one can see her influence across all these.

So if you are a teacher considering a school leadership position, or a parent wanting to better understand what great Heads do, Headstrong is a great place to start.